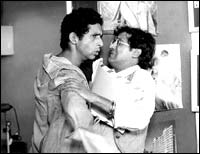 It is the pop culture reference to beat all pop culture references. Late last night, driving around, a friend asked if I remembered where her car stood. Near the bushes, I said dramatically in Hindi, pointedly using the words 'jhaadiyon ke beech.' The words, spoken with an obviously sinister rasp, immediately made another friend respond with a barrage of questions about standing in a park and wearing 'a check-coat.' Our palms met in a gleeful five, our collective hat doffed toward the greatest black comedy Hindi cinema has ever known.

It's been 26 years since Kundan Shah's seminal Jaane Bhi Do Yaaron, a film whose sheer iconicity beggars description. Imagine the Star Wars characters in Pulp Fiction with even more quotable dialogue, and you'll begin to get an idea of the shadow cast by the cult of JBDY.

No wonder it takes half a second to slip into a quotefest, all us fanboys pouncing on the most innocuous and generic of quotes -- the aforementioned bushes referring to a scene when Naseeruddin Shah's Vinod grilled Pankaj Kapur's Tarneja in front of the press, provoking him into a fit of rage.

Considering the fact that I have to rein myself in instead of going on and on about the ludicrous nuances of that wonderfully loopy plot, it is no surprise that we, the children of the 1980s, are mad about the one truly effective and potently funny satire, the one good black comedy, that our cinema has managed to successfully make. It is even lesser of a surprise that Jaane Bhi Do Yaaron continues to inspire filmmakers to this day, to the extent that the JBDY-style flick has, today, become a bonafide sub-genre in our cinema.

It is a dreadfully sobering fact, however, that this is clearly the one genre all our new-age directors, the sort who love handheld cameras and the word Edgy, are getting disastrously wrong. Every few Fridays another outrageously over-the-top movie attempts to string together some manic shenanigans and bottle up lightning in a manner clearly derivative of The Film -- and singularly fails. They're all trying far too hard to be clever and absurd and whimsical and profound, all in the same breath, and falling flat on their faces. It's tragic.

The word 'wacky' is one to watch out for at script pitches nowadays. A writer-director (for it is only within themselves that most writers of such scripts find kindred directorial spirits) talks about how mad and dark his film is, but alarm bells ought to start ringing soon as he describes his comedy as Wacky. Or, better yet, as 'a Jaane Bhi Do Yaaron-like film.' (By the by, which director has ever called his upcoming film the next Citizen Kane? Or Annie Hall? Or Kaagaz Ke Phool?)

And pull off they don't. Sure, they come up with funny names for characters and are absolute whizzes at deciding what stereotypical accent to skewer. But while a few of them even have an actual plot, the films end up trying so hard to be cult, they forget to being competent films. JBDY's magical ensemble cast mastered the tightrope walk between outrageous and utterly real in each scene, and their nuanced portrayals make us rewatch the film a hundred times. The modern-day makers seem content with a random bunch of faces, albeit sometimes talented ones, and make them all play 'funny,' all the time -- which makes them not quite so. 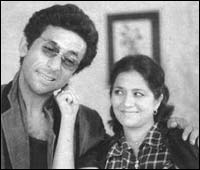 The writing suffers from similar over-affectation, yet the genre's screenwriters manage a tricky paradox between overdoing -- characters turn caricatures, lines are riddled with puns, gags that actually work are overdone until death -- and underdoing, or just undoing. As in, while they concentrate insanely hard on making things quirky, they desert plot, logic and structure. Thinking that being madcap gives them writerly leave to sleep on the job, they figure it's easier to squeeze in two gags instead of actually figuring out the mechanics of plot coherence and ideation. This is as fatal as flaws come.

Pankaj Advani's Sankat City has a genuinely good plot, and the circuitous twister could have been great, except the film chokes all the funny out of the gags by pushing them down our throats, constantly. Indrajit Nattoji's Aage Se Right works well enough till its outlandish plot turns plain unreal, after which all connect is lost. And these are the better examples in an increasingly cluttered genre, one that eschews logic in favour of absurdity, all in the name of farce.

It's no coincidence that Vinod Chopra and Sudhir Mishra, the production controller and screenwriter whose names were borrowed by the protagonists, never tried their hand at 'a JBDY-style movie.' They know better. The genre shares its problem with the entire multiplex-driven New Bollywood movement. While we have scores of directors slaving away at trying to be Tarantinoesque, Lynchian or even Spielbergish, there are precious little trying to find their own unique voice.

Think it's fine to keep farcing the issue? Or should we stop being patient and kill all mockingbirds? Write about that, cinema, or anything else you may feel like at senterfold@rediffmail.com. For more rants and raves, find me at Sen City. Until soon, cheers.

What is your favourite movie moment?