Why Archie should marry Veronica

The online world is scandalised. Most of us haven't even randomly leafed through an issue of Archie for a dozen years now, but suddenly we care about who the redheaded teenager gets married to. There is scandal, outrage, and some rather interesting nostalgia on blogs all over the place. Archie's making headlines again, and for his wedding, just like Brad or Aamir or Paris or Leonardo. Wow.

To be fair, the importance isn't exaggerated. A significant number of us, especially those farflung from the United States, grew up believing in Archie as Americana, and imagining life in the US to be just that vision of slacker-driven jalopies. A very close friend -- who once claimed to be moving to Riverdale, USA, a fib we never let him live down -- travelled there after high school and, on his first phone call from the US, said, quite simply, 'but life's not like in Archie.' 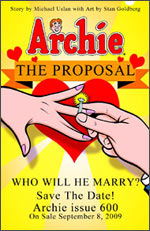 True that, and a bit of a shame. We grew up reading the comic, smuggling the surprisingly risque bikini covers under more legitimate issues of Little Archie, and at an age before satellite television (and Baywatch, and Friends) had come upon us, it was our most widely-accessible reference point for the West. There was Archie's Americana Series -- the 60s and 70s issues remain the series' best -- and right through the 80s, they gave us a dose of schoolyard tomfoolery and severe snogging, not to mention redheads and blondes.

The characters are really just a bunch of overused stereotypes, but there's no doubt we've all been there at some point. Most men grow up idolising Jughead for playing the drums and preferring burgers to girls, but pre-teen affection is jumpstarted as one girl invariably makes our hormones kick in and turns us into excitable young fools, all singsong smitten. Life chugs along, and we turn into either egotistical self-obsessed good looking chumps like Reggie or stay grounded and doomed to much woman-woe like Archie. Or just stay chilled like Jughead, who will eventually find himself the prizest catch of them all, but all in good time.

For the girls, it was simple. Betty was the domesticated homebody, the girl who would knit sweaters for kittens and write long fantastical passages about Archie in her meticulously updated diary -- some true blogging blood, that one had -- and she was the golden haired 'sugar and spice and all things nice' kind of little thing. Meanwhile Ronnie was the pampered girl used to getting what she wanted, and one with decidedly more sass and spunk than her blonde rival. She had Archie wrapped around her little finger, and that's how she liked it.

And we've all met more Veronicas than Bettys. Fact.

Any how, let us cut to the chase instead of wallowing in trite generalisations, fond smiles regardless. The current scenario is that Archie -- as he trundles towards issue 600 -- will marry one of his sweethearts, and today's big scoop, so to speak, is that the lady in question will be Veronica Lodge. Ta-da. 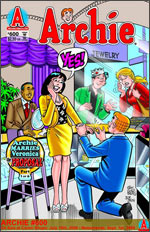 So out come the Ronnie-haters, clogging up the blogosphere and our Twitterstreams with outrage about how Archie chose the wrong girl, the rich one instead of the one next door, and how Betty really loved him while Ronnie treats him like a plaything and yada yada yada...

Betty, in my unpopular opinion, is boring. She's predictable and sad and kinda pathetic in the way she moons for a guy who hasn't even really led her on, and her innate chickflick-iness helps only in contrast. Without a bratty Ronnie to bark unreasonable orders at Arch, Betty's just far too blah -- sorry, Marylin, but some blondes aren't worth all the fun.

Fact is that Archie has, for once, gotten it absolutely right. He's gone with the girl he wants, not the one everyone thinks he should end up with. He's gone with the girl who drives him crazy, the one who causes far more crimson heart-shapes to pop up in his head and eyes, and the one he truly madly loves -- for better or worse. And isn't taking that plunge the ultimate romantic moral?

Of course, chances are it won't take. Damn.

Nothing seems permanent in comicdom anymore, tragically enough. Marvel and DC Comics regularly have massive, canon-shaking bi-annual events, events that encompass multiple characters and issues, to kill characters and change things forever -- only to safely reboot them to normalcy by the end of it. A few months ago Batman RIP guaranteed us Batman's death, shaking most of us out of apathy and into an anguished what-next mode. What happened? Nothing, the squib was damp, and delivered a dishonourable comic instead of death. Typical.

We live in an age of temporary promises. So if you think Betty and Archie belong together, don't sweat it. They'll get by. He'll dump Ronnie at the altar, she'll conveniently rush to Reggie's arms, or they'll end the series in September and go back to merrily being singletons again. It's Cop-out Central in franchise town nowadays.

For now, though, I wanna thump carrot-top on the back. Congratulations, Archie. You did good.

Think this is balderdash and feel really sorry for Mr Lodge? Want to recommend the bodacious Cheryl Blossom to Archie instead? Feel free to write in on comics or whatever nonsense you feel strongly enough about to me at senterfold@rediffmail.com and drop in at my blog for further insanity. Cheers, you lot. Have a fun weekend.
Raja Sen
COMMENT
Print this article