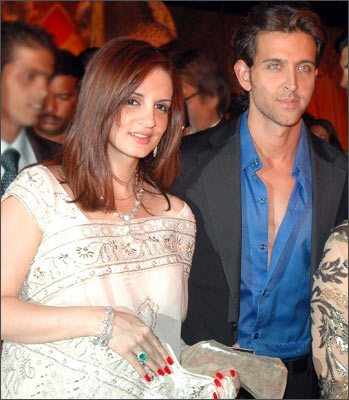 Rumours are rife that Hrithik Roshan had split with wife Suzanne.

Hrithik however, who was shooting for his home production Kites, in a statement said there was no truth to reports appearing in a section of the media that Suzanne had walked out of the marriage due to his affair with Kites co-star Barbara Mori.

The actor who returned from South Africa where he was shooting, said, "It is too funny! Suzanne has shifted to her parents' place with the kids two days ago and I was to join her on my return as there is a white ant treatment going on in my house and a section of my floor is being renovated."

Reports of Hrithik's alleged romantic involvement with Barbara have been doing rounds since the film's shooting in Mumbai a couple of months ago. During the shooting, Hrithik even took Barbara and her family to Lonavala.

The actor and Suzanne have been married for eight years and have two sons.