News
Business
Movies
Sports
Cricket
Get Ahead
Money Tips
Shopping
Sign in  |  Create a Rediffmail account
Rediff.com  » Movies » Kishore Kumar, the only Genius I ever knew

Kishore Kumar, the only Genius I ever knew 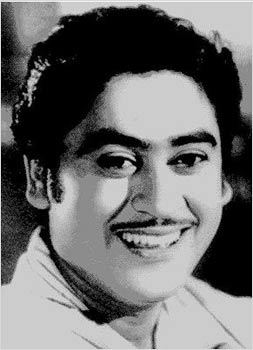 When Pritish Nandy interviewed Kishore Kumar for The Illustrated Weekly of India, Asia's oldest and most venerable magazine, it was a stunner. Posing with a skull on the Weekly's cover, the great singer gave Nandy, the magazine's editor, an interview that remains a hallmark of great interviews 24 years later.

In this special feature, exclusive to rediff.com, on the occasion of Kishore Kumar's 80th birth anniversary, Nandy, now a movie-maker himself, salutes the genius's memory.

I first met Kishore Kumar when I went to ask him to perform for the Filmfare Awards night.

I had just come to Bombay in the winter of 1982 and taken over, among many other things at The Times of India, Filmfare magazine. I found the Awards ceremony in Shanmukhananda Hall awfully boring and couldn't keep my eyes open the first time we went to see it. Rina, my wife, kept pinching me to keep me awake.

Ashok Jain, who was then the chairman of The Times of India and had hired me, much against the wishes of many others, called me in the next morning and told me I must take charge of the Awards from the next year onwards and make them more exciting, get more stars to attend and participate in the event, and find a better sponsor who can give us the money for all this.

Among the first things I tried to do to make event more fun was to call on Kishore Kumar and persuade him to perform at the next Awards. He and I got on famously from our first meeting. Not because we were both Bengalis whose families could be traced back to Bhagalpur in Bihar, where our homes were almost contiguous, but because we bonded over horror movies, a rare passion in those days, which we both shared.

He promptly agreed to discuss the idea on three conditions: 1. I would not insist on staying back for dinner at his house, post our discussions, since dinner was an expensive proposition and much as he liked me he had no intention of feeding my face. 2. I would gift him a signed copy of my book of poems, Lonesong Street, which he claimed he had heard so much about, but had not read and had no intention of ever reading and 3. I would never ask him to lend me any of the horror movies in his collection nor try to borrow any money from him in the future which he claimed every journalist and everyone in the film industry had done at some time or the other.

I was barely 28. It was easy to agree. I said 1. Perfect, I had no intention of eating his stupid food and he could take it and stuff it wherever he wanted. 2. I would try and get him a copy of the book from Shanbhag at the Strand Book Stall who I knew had a few. 3. No sweat; his horror movies and his money were safe with him. I had no intention of getting within miles of either.

He smiled his strange smile and thus began our friendship on such firm ground. I must confess I stuck to all his three conditions and he was delighted to find someone from whom his money, his horror movie collection and his food was safe. I was also happy because I coveted none of them.

I enjoyed his company and found him absolutely delightful. I guess I was the only one because everyone else I knew thought he was a complete crackpot.

He was not. He was a genius and that is what I called him in the cover story I wrote on him in The Illustrated Weekly much later. In an industry of cracked people, he was possibly one of the sanest. He knew fully well what he wanted and there were only ten things in his cravings list. 1 to 8 was clearly money. 9 was fame and recognition. 10 was the love of beautiful women. But his problem was that he hated having to buy them expensive gifts. In fact, he hated having to spend money on them in any manner whatsoever. He would never buy them dinner, or so he claimed. He would never buy them any gifts. And, most important, he would never tell them where he stacked away his cash.

He advised me very seriously, I remember clearly: Never tell a woman, any woman, where your money is. Both will disappear at the same time, poof! I never asked him if that wisdom came from his personal experience. In fact, I never probed into his life at all. That strengthened the bond between us. We simply enjoyed each other's company. There were no strings attached.

Even to participate in the Filmfare Awards, he laid down three conditions: 1. His would be the Big, Big opening act of the show and the only one, after which the awards must be given out. 2. The show must be held outdoors on Chowpatty so that everyone could watch it on big screens put up on Marine Drive, not just the invited guests. 3. The Mangeshkar sisters should not be invited for the event because they were too famous and would distract attention away from him.

I agreed to the first condition and told him that the second one was subject to police and BMC (then the Bombay Municipal Corporation) permissions, which were turned down and the event never eventually happened as a consequence. The third condition I thought was silly and told him so.

He said he would think over it and promptly named three producers I must in that case not invite to the event.

It was always a question of give and take with him. Not as transaction, but as a game. If you wanted anything from him, you had to give him certain things in return. The stranger you made your conditions, the more he loved you.

Once he offered to come to my flat in Walkeshwar from his Juhu bungalow in a convertible wearing only a towel and yodelling all the way if I would cut an album of Angrezi songs with him. He demanded I should write the lyrics and he would get RD (R D Burman) to score the music. He would record the songs himself. I had already walked away from my poetry a couple of years earlier, in pursuit of serious journalism, and refused to indulge him. He sulked and sulked, but there were never any hard feelings.

In fact, our friendship was largely based on the fact that we really had nothing much to ask of each other. I was not making movies at that time. I was an editor and a journalist. He was a singer and an actor, director, story writer who loved his profession but did not enjoy the people he had to work with all the time. In fact, that was his perennial complaint.

Was he serious? I doubt it. He loved money, yes. And he loved talking about it. For his act in the Filmfare event, where he was supposed to land on Chowpatty airdropped by parachute from the sky, with his orchestra guys, he kept telling me how he wanted a Huge sum of money for the act. When it actually came down to numbers, what he asked for only Rs 50,000. Money was a tamasha for him and I think he really made fun of it by talking so much about it. He was spoofing the obsession that others in the movie and music industry had for money by talking about it non-stop.

He told me once how he had hidden all his cash away so cleverly that leave alone the income tax guys, even his family would never find it after his death. I told him that was a silly idea. But he was adamant that his money was his money and no one had a right to it, he would do exactly what he wanted with it. And every conversation between us, when it ended in an argument or a deadlock, he would start singing some cracked coded song which was my job to decipher.

Long before I met Dr Robert Langdon in the Da Vinci Code, I had met a man who enjoyed puzzling others with his strange symbology and cryptograms, all of which sounded totally weird and puzzling, but had actually perfectly intelligent solutions. He thought them up (or at least appeared to) on the spur of the moment and loved playing the Mad Hatter at Alice's tea party.

For me, Kishore never really passed away. It's impossible for a man like him to die because he personified life itself. I remember him often. I occasionally discover stuff I had written on him in the past, notes and scribbles he had sent me, his notations for his songs. Since he couldn't read music, he created his own set of notations and brilliantly explained to me one day how he used them. He dreamt of singing along with one of the great philharmonic orchestras one day. He wanted so desperately to cut an album of English songs so that the world outside would notice and remember his work. He wanted to be rich and famous, much more than he was. And he was eager to hide his wounds from everyone. He had many I suspect.

No, Kishore was not a lonely man at all as many said he was. He enjoyed solitude (that was another bond we shared) and had the supreme pleasure of having himself for company. He loved himself to death and enjoyed his own company so much that I would often marvel at his ability to find every joy within his own heart. He hated sharing anything with anyone. He felt he owed nothing to no one. He certainly owed me nothing but I saw tears of joy in his eyes when I told him that I had fought with Naushad on the jury for the Madhya Pradesh Government Culture Awards. (I think they call it by some other name these days) to make sure that he was the first popular singer that ever got the music award. Naushad angrily walked out of the jury meeting but, to my delight, my friend Kumar Gandharva fully backed me totally and so did Mani Kaul. The rest all fell into line.

The funny thing was that by the time Kishore actually got the award from the MP Government, on someone's bright idea, the award had been renamed the Lata Mangeshkar Award!

He almost cried on the phone when he told me that.