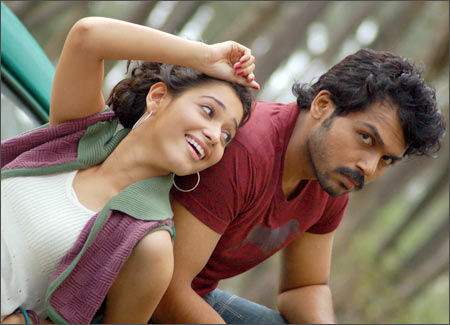 It was more than two years ago that Suriya's younger brother Karthi's first Tamil film Paruthiveeran was released, and created a flutter.

Karthi, unlike other newcomers, was never in a hurry to sign dozens of films. Although Paruthiveeran was a huge success, he signed only one film thereafter, Selvaraghavan's Aayirathil Oruvan. But the film has taken its time, and been completed only now. Now that the audio has been released, it is as safe bet that the film will see the light of day very soon. He has chosen a light hearted film like Paiyya as his third project.

With Tamannah, one of the hottest actresses in Tamil, as the heroine of the film, the buzz around the film is very high. So far in 2009, there has been only one real blockbuster and that is Ayan, which starred had Suriya and Tamannah. The next successful film is Padikkathavan which starred Tamannah opposite Dhanush. With the Tamil remake of Jab We Met also in her kitty, Tamannah is the "in" heroine in the industry.

Another reason to look forward to Paiyya is it's director Lingusamy, one of the successful commercial directors.Definitely a film to look out for.