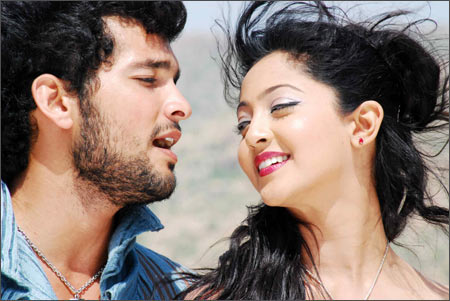 Director Yograj Bhat's Mungaru Male remains one the most successful and talked about Kannada films even today.

So, naturally, Bhat's latest directorial effort, Manasaare, which has been produced by Rockline Venkatesh, enjoys a great deal of anticipation.

It also features some new faces. Except for Diganth, who played one of the heroes in Bhat's Galipata (which ran for 100 days), Bhat has compiled a team of new artists.

The film is scheduled to hit the screens in August.

Early buzz has it that, this time around, Bhat has made a different type of love story.

"It is a dream film," Andrita says. "Yogaraj Bhat sir treated me like a kid and got the best out of me. He is super cool on the sets and makes us very relaxed during the shooting."

As for Diganth, he sports a new, more mature look in the film. "Like his previous films, Bhat sir has captured some fantastic visuals. It would be breathtaking on the big screen. Unlike my earlier roles, I play a mature character," says Diganth.

Sathya Hegde, who is the regular cameraman for Yogaraj Bhat's protege Soori, is working behind the camera. Mano Murthy, who composed music for Mungaru Male, is the music composer.

The film has been shot in Madikeri, Mysore and Bangalore. A special hospital set was erected inside the Madikeri Jail, where major portions of the film were shot.

Shooting for the film has been wrapped, except for a song featuring Andrita and Diganth. The post-production work is well underway.