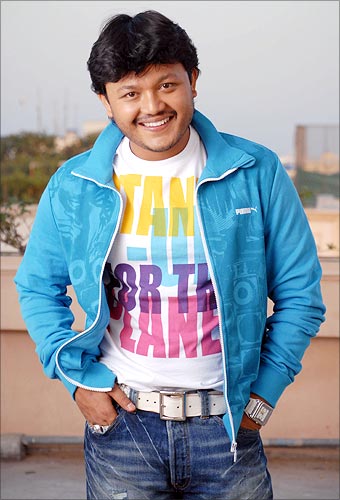 'Golden Star' Ganesh is all set to launch his next film Kannada film Maleyalli Jotheyalli.

The movie is being scripted and directed by Mungaru Male story writer Preetham Gubbi under his Home Production banner. Shooting will start soon.

Gubbi wrote the story and screenplay for films like Geleya and later turned director with Haage Summane with newcomers Kiran and Suhasi.

Gubbi had narrated the story to Ganesh two years ago but the actor was too busy to take up new assignments. When free, Ganesh thought of the story as both of them are in need of a big hit. Gubbi's debut film Haage Summane turned out to be an average grosser and so was Ganesh's last films.

Maleyalli Jotheyalli will have Hari Krishna as the music director and S Krishna as the cameraman. The heroine of the film has not been finalised yet, but sources say two Bollywood actresses and two popular artists from South have already been contacted.

Ganesh will also be acting in another film this year by Chandrashekhar of Nimishambha productions [who produced Bindaas with Puneet Raj Kumar]. Film industry sources say that Chandrashekhar is now in Hyderabad to contact Telugu heroine Ileana.

Meanwhile, Ganesh is enjoying fatherhood. He and wife Shilpa became proud parents of a baby girl on Ugadi Day. Ganesh stayed at home for nearly two months to be with his daughter who he fondly calls Goldie.

"When Shilpa was pregnant, I used to play a lot of music and movies and tell a lot of jokes to the baby. During the last two months I took time off from work to spend time with my baby," Ganesh says.

Meanwhile, Ganesh's Ullasa Uthsaaha with Chandigarh based Yami Gautham, directed by debutant Devaraja Palan is getting ready for release. It is a remake of the Telugu Hit Ullasanga Uthsaahanga directed by Karunakaran.