Get scarlet fever with Gulaal's music

The start is tremendous. 'Aarambh hai prachand,' intone Piyush Mishra and Rahul Ram as the warrior readies for battle in Aarambh, the opening track of the album. The fanfare evokes old television Mahabharata memories, but the poetry kicks in to make this a truly sublime song.

Lovely hardcore Hindi words -- the way the colour red is celebrated as the colour adorning the warrior's brow is something special -- gradually push the song's rampaging narrative towards a crescendo. And just when it builds to an absolute explosion, the volume drops off into a nearly-romantic whistle lulling us into a smile before the final blow stirs us up again. Wow.

'Sleep too has now gone to sleep, the nights don't even care anymore.' Shilpa Rao does very well in Aisi Sazaa, a soulful song made memorable by her distinctively dulcet tones. Thunder disrupts the soundscape but the singer soldiers on, and it is the words that now pull the track forward, their constant paradox-juggling mesmerising the listener into a oddly beatific trance. Quite haunting, this lullaby. It's a little jarring stepping into mujraa territory with Beedo immediately after a track like this, but Anurag Kashyap's all about unpredictability. And when its the sublime Rekha Bhardwaj on vocals, you know you're going to be in good hands. She gasps sensuously mid-chorus, panting for breath as if the words are stretching her to the very extreme. A track that feels slightly longer than it should, this will doubtlessly be used cleverly enough in the film to make us love it.

Mishra comes into his own most impressively with Duniya, a track where he pays tribute to Guru Dutt's Pyaasa and yet stays wonderfully, poetically original. The song is both a lovesong and a lament, an observation and an ode. The lyrics bow into homage waters throughout, and it is when Mishra is salaaming the poets of yore -- Ghalib, Momin, Majaaz, Faiz, Firaakh, Sahir, Makhdoom, Mir, Zauk -- that you feel the need to stand up and applaud. Pure poetry, pure magic.

That Kashyap has some love for classic Westerns can be gleaned from the mood of Raat Ke Musafir. A guitar being plucked around a campfire, accompanied by minstrel Rahul Ram singing what is essentially a cautionary tale, warning the midnight wayfarer to not stray too far, and to watch with care. For what if the pebble he listlessly kicks happens to strike him in the forehead? A deceptively atmospheric song, this is a mood track that works largely because of the words.

And now the album's surefire hit. Rekhaji takes to the microphone again with Ranaji, this time accompanied by the album's main man, Piyush Mishra. The most whimsically written mujra in history, the track talks about globalisation, borrows lines from rivalling cola brands, and talks about Uncle Sam seating himself forcefully in the middle of Iraq, all the while cheeky and bright. It's hard to imagine a song that could potentially have us all dancing uncontrollably while the lyrics go on about 9/11, but here we are. Heh. 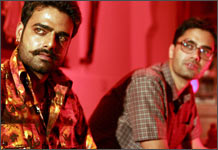 Mishra brings on the multitalented Swanand Kirkire as accompaniment for Sheher, a longish track with blood dripping constantly through the words. It is as if two warlocks engaged in a poetic jugalbandi as they sat around a bubbling cauldron, and countered each other with spells and curses that just happen to rhyme. The sound effects and the overall volume of the track can sometimes get a bit much, which is why this depravedly dark song feels a little monotonous if you don't pay attention to the words. But do, it's worth it, just for the glorious shudders this track can give you.

We enter into Kashyap's beloved Indian Ocean territory with Yaara Maula, sung by Ram, Aushim and Piyush Mishra. This, ladies and gentlemen, is a true rock original, a neatly building track with the pure authenticity and poetry rock demands. This isn't random warbling about laundry and jeans, but a song about revolution -- both internal and external. The lyrics, as the track recounts violence and bookburning, are immeasurably violent, even nightmarish. And just when we sink our teeth into the track and long for more, it abruptly tapers off, making us long for more. Bloody well done.

Piyush Mishra, a man we know best as a strong character actor, needs to be applauded immensely. His compositions have been dramatically different from anything we've heard in a long while, and while there are bits that 'feel' like Vishal Bharwaj or Indian Ocean -- even as the album initially feels a lot more like a Sudhir Mishra soundtrack than an Anurag one -- Piyush makes Gulaal shine with his voice, his words and his creativity. In keeping with the film's heady theme, this is a revolutionary soundtrack.

Listen to the songs of Gulaal