Little Zizou opens curiously, with frames from a graphic novel, intercut with the weird imagery of five 'Russians' running through the streets of a Parsi colony. Confused? Don't be, because a young lad (Jahan Bativala) with precise diction and a comfortable screen presence decides that the tale needs a narrator and he is more than prepared to step up and accept the role.

As he tells it, this is a tale of two dueling patriarchs, who drag their families and the community through uncomfortable times in the name of doing what is right. In the right corner is Cyrus II Khodaiji (Sohrab Ardeshir), a man who has used his last name to wiggle his way into a seat of high power among the Parsis, while in the left(ist) corner there is Boman Pressvala (Boman Irani), the music-loving proprietor of an ageing newspaper who takes great pleasure in baiting Khodaiji and mining all his actions for comic relief.

Xerxes aka Little Zizou (because of his passion for soccer and his belief that Zinedine Zidane is the greatest player in the world) and his older, more cynical brother Artaxerxes (Imaad Shah), are Khodaiji's sons. Neither boy spends much time around their father, mostly because he is too wrapped up in his chanting and power games to care for his own flesh and blood. 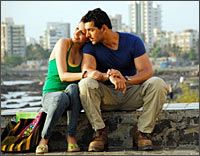 So Xerxes hides out in the Pressvala household, seeking any affection he can eke out of Mrs Pressvala (Zenobia Shroff) who harbours an extra dollop of affection for him since he is a 'motherless child'. This inspires reactionary jealousy in Liana (Iyanah Bativala), the younger Pressvala sibling while Zenobia (Dilshad Patel), the older daughter, serves as the object of Arta's affection. So far, so very symmetrical.

Artaxerxes is better equipped to keep sketching various images of his perception of life in and around their world than he is to let Zenobia know how he feels about her. Too late for him to protect his lovelorn heart, he learns that Zenobia is in love with someone else. In his life away from his failed attempt at romance Artaxerxes has a secret, housed in an abandoned maternity ward; less secret is his long-simmering anger against his father, which he gives vent to in an online blog.

Sundry other characters play parts of varying sizes in this story that is essentially a road map through the goings-on in a small community. These are people that writer/director Sooni Taraporevala probably knows extremely well and in her listing of their quirks and foibles she exhibits an affection that can only come from knowing one's people and continuing to like them. 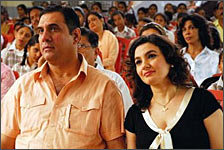 Of the cast, Zenobia Shroff is outstanding as the harrowed mother, wife and daughter. At no time during her entire time on screen does one get the sense that her character Roxanne is not a real person. As her happy-go-lucky husband Boman Irani turns in another strong performance, as does Shernaz Patel as Khodaiji's overworked and underloved secretary. Imaad Shah brings depth to his angst-ridden character while Jahan Bativala performs the role of narrator and key player with aplomb. This is definitely a youngster to watch out for and it should come as no surprise if his performance grants him a certain ubiquity, on the big and small screens, in the years to come. John Abraham's cameo is the best cast of the many bit parts that litter this narrative -- all he has to do is turn up and look good.

As a seasoned screenwriter Ms Taraporevala seems to have taken to heart the concept of 'finishing strong' -- Zizou meanders for a while, especially in the establishment of the world, and while it is never unwatchable, one entertains the idea that they should get on with it. But when the houselights come on at the end of the film, it will occur to those in the hall that she tied it all together rather tidily.

Rather than being an ambitious opus designed to prove a point by a debutante director, Little Zizou comes across as a paean of affection to the people the filmmaker has known all her life. If that was the primary purpose of the film, mission accomplished. For those hoping for a little light entertainment and the possibility of leaving cinema halls with a smile on their face, Zizou might well be the perfect weekend retreat.

'You will be entertained by Little Zizou'

Why Obama should watch Little Zizou