When Ishrat Raza Jahan, 19, left home in Mumbra, 30 km from Mumbai, to visit Ahmedabad on June 11, little did Shamima Raza know she was waving goodbye to her daughter for the last time.

Today, newspapers reported that Ishrat Raza, a first-year science student at the Khalsa College in Matunga, northcentral Mumbai and an alleged operative of the Lashkar-e-Tayiba, had been killed in an encounter with the Ahmedabad police.

Shamima, of course, had not heard of this. So she was taken aback when reporters descended on her home on Wednesday afternoon asking about her daughter.

"What happened?" she wanted to know. "Why are you all asking so many questions about my daughter? Is she okay? I am getting worried now. She had called me on Saturday and said she would be home soon. I hope everything is okay with her."

But Ishrat's younger sister Mussarat felt that something was amiss and so went to a neighbour's house to fetch a newspaper. That is when she learnt the devastating news.

Pointing at the picture published in the newspaper, a weeping Mussarat said, "This is the same dress Aapa [elder sister] had taken with her before leaving for Ahmedabad. I can't believe she is no more! How do we tell our mother now? She will be
shattered."

According to reports from Ahmedabad, Additional Commissioner of Police (crime) D G Vanzara said, 'Ishrat was in contact with a Lashkar-e-Tayiba group through Javed whom she had known for some time. She was being used as cover by the terrorists.'

Ishrat was killed along with Zeeshan Johar, Amjadali Akbarali Rana, and Javed at 4.30 am on Tuesday, June 15. The police said they had planned to kill Gujarat Chief Minister Narendra Modi. 'When told to surrender, the group started firing on police and therefore they were killed in retaliation,' Vanzara said.

Asked if she knew any Javed, Zeenat, Ishrat's eldest sister, said, "I don't know. We have no idea. I am too shocked to react to this news."

Zeenat said Ishrat had few friends. "She used to go to college and come back," she said. "Before she left [for Ahmedabad] she didn't tell us why she was going. It was the first time she had gone out of Mumbai. And now she has been labelled a terrorist!"

Life for the Raza family has been full of misery ever since Mohammad Shamim, its head, died three years ago, leaving his wife to bring up seven children.

Hailing from Patna in Bihar, the family has been staying in Mumbra for the last 13 years. Shamim took up odd jobs to keep the kitchen fires burning. As long as he was alive, relatives kept in touch with them. But after his death, most of them  abandoned the family.

It was then that Zeenat and Ishrat began supporting the family by giving tuitions at home.

The walls of the Raza home are unpainted. An old bedsheet is used as a curtain at the entrance to the bedroom, where there is only a small mattress, no bed. For visitors, there are only two chairs in the main room.

"She had 12 students whom she used to teach," Zeenat said. "She used to earn money with me and we used to manage our family's day-to-day expenses somehow. We used to pay rent for this flat and also the school fees of our brothers and sisters. I don't know how I will manage without her."

But no one in the family has any idea why Ishrat had to go out of Mumbai and what the nature of her business was that required her to stay there.

"We didn't ask her why she was going," Mussarat said. "She only told us that she had some work. She assured us that she would be back soon. Now, I cannot believe that she will never be back!"

Neighbours were too shocked to react and could not believe that the simple girl living next door could be a terrorist. Sharif Ahmed Ansari, a rickshaw driver, said, "I am too shocked! She was a simple-looking girl. I have dropped her many times in my autorickshaw. I always saw her holding books. I cannot believe this girl could also hold a gun!"

Mustakin Shaikh, another neighbour, said, "For the last five years they have been staying here. This family has never quarrelled with anyone. They are peaceful people. I have seen Ishrat so many times. She was a good student. I cannot understand how this girl turned to terrorism." 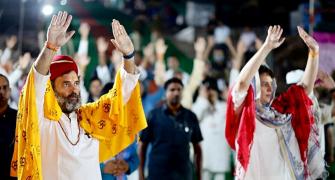 BJP launches its own yatra in MP to counter Rahul

Eknath Shinde back in Guwahati, 5 months after revolt