In the first of its kind, leading Hollywood studio Warner Bros issued an advertisement in a newspaper stating that no one has the right to remake their film, The Curious Case of Benjamin Button, in Hindi.

The issued by Lall & Sethi Advocates, on behalf of Warner Bros Entertainment Inc, said, 'Warner or its co-owner has not licensed any party to remake or make any film based upon the said film and shall initiate legal proceedings against any producer found producing a film either in English or Hindi or other language.'

When we contacted Chander Lall, Managing Parter, Lal And Sethi advocates, he said, "We read reports in the newspapers that a well known Hindi film producer and director is remaking The Curious Case of Benjamin Button. That's why we issued this notice."

There were rumours doing the rounds that Vipul Shah is remaking Benjamin Button with Akshay Kumar. In fact, shooting for the film -- titled Action Replay -- is underway.

When we asked Lall if Warner was referring to Vipul Shah, he said, "I don't want to take names. We just want to protect our scripts. We read that a popular Bollywood producer was remaking the Hollywood film The Departed in Hindi. We sent him a notice immediately."

Hindi films are known to rip off Hollywood films, some even copying it scene by scene. But now, Hollywood seems to want to put an end to this. Recently, David Dhawan's Partner -- a copy of Will Smith-starrer Hitch -- was issued a court notice for plagiarism.

When we spoke to Vipul Shah about Warner's advertisement, he clarified that his film was based on a 1994 Gujarati play called Action Replay.

"I never copy my films. I am not a DVD director. In fact, I have not even seen The Curious Case of Benjamin Button," he said. 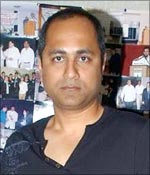 "The shooting of Action Replay is on schedule with Akshay Kumar," he added. "As far as this release is concerned, I cannot comment on it because of the ongoing film strike."

When we informed Lall that Vipul Shah's film was inspired from a Gujarati play, Lall replied, "We will see the film first and then respond. If it is legitimate, we have no issues. At the moment, we have put up a public notice and anybody who remakes The Curious Case of Benjamin Button without our permission risks losing money. We will take action."

So why is Hollywood waking up to Bollywood remakes at this time? "In my opinion, the stakes have become high," Lall replies. "This had to happen eventually. Hollywood has far greater interest in India now."