Here's why you should watch Earth

After several days of trekking across the Kalahari, the matriarch finally leads the herd to a water hole in the desert. But soon the elephants realise they are not alone, there are hungry lions around them.

In one of the most dramatic scenes in Disney's Earth, a spectacular, suspenseful and entertaining film, we learn that while the elephants dominate the water hole during the day, lions, which can see far better in the darkness, are not only after water but also the calf.

The elephants gather around the calf to form a wall but the lions are not giving up easily.

You watch from the edge of your seat, wondering, if calf and its mother will survive the night?

Earth which opens in thousands of screens on Earth Day (April 22) is narrated by the veteran actor James Earl Jones; there is plenty of funny, romantic and feisty scenes in the film apart from poignant stories. It offers compellingly fascinating stories of three animal families and their amazing journeys across the planet over a year.

Disney has promised to plant a tree for every person who sees this documentary during its opening week. Nature movies in recent years have had big audiences, and a few have grossed over $100 million worldwide. Disney press release says the tree plantings will target the Brazilian Atlantic Forest, which is considered the most endangered rain forest in the world.

Directed by Alastair Fothergill and Mark Linfield, the acclaimed creative team behind the Emmy Award-winning Planet Earth, this is a film full of wonders and majestic scenery. And yet it is not all that pretty. When you watch hundreds of elephants dragging themselves across arid African landscape in search of water, you not only feel for them but may also start wondering what the humankind has been doing with our natural resources.

Though the film does not always tell us where some scenes were shot, it is reported that it was photographed in some 50 countries. Some of its most dramatic scenes show birds from Mongolia fighting hard to survive the wintry Himalayan mountains to spend a few months in the warm Indian climate. 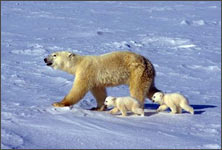 'We literally filmed from pole to pole," says director Alastair Fothergill in the production notes. 'It's a celebration of the beauty of the entire planet. In a sense, Earth is like the overture in an opera. It's the very, very best together in a wonderful epic celebration, so it's a wonderful opener for the whole of the Disney nature series of movies.' He adds that starting in the arctic winter just 700 miles from the North Pole, Earth follows the sun's warming influence as it travels south right down to the Antarctic.

'This epic global journey is told through the eyes of three key animal families,' he adds ' We watch as a polar bear mother struggles to feed her newborn cubs as the sun melts the ice beneath their feet. We marvel at the determination of an elephant mother as she guides her tiny calf on an endless trek across the Kalahari Desert in search of fresh water. We follow a humpbacked whale mother and her calf as they undertake the longest migration of any marine mammal -- 4,000 miles from the tropics to the Antarctic in search of food.'

The reason the film was shot in extreme environment was to remind the viewers that the animals and birds in the region where survival is tough are facing additional problems because of global warming and other problems created by people across the world.

James Earl Jones applauds the film-makers tenacity and the fact that they took over five years to make the film.

'The people who put the footage together for this film are artists,' he notes. 'Not just artisans, as every photographer has to be, but artists. To have the patience to find the subject, to know what angle they want to shoot that subject in, the light they want to shoot the subject in and then the patience to wait for it to behave in a way that's interesting, that they've never seen before -- that's artistry.'

Take for instance, the polar bears living some 700 miles south of the North Pole; a male adult bear hunts far out on the pack ice, which, as spring arrives, is melting around him earlier than in recent  years. And the mother bear emerges from her den with her two cubs after a long winter in their snow den. Her challenge is formidable too. She has to get the cubs used to the big outdoors. More important feeding her family has become more difficult as the sea ice is fast melting

'I think the polar bear has become an emblem for all the animals that are struggling on planet Earth because its plight is so visual, it's so graphic' muses director Mark Linfield. 'When the polar bear falls through the ice, you almost need no commentary, the images just tell the story and it's heart rending. 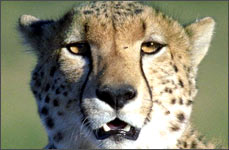 'Of course global warming hits the poles first, that's where we first see it and that's where it hits hardest, so the polar bear in a very real sense is a barometer for what's happening and a warning for what's ahead.'

The dramatic shots in the film owe a lot to the helicopters.

'For me, probably the ultimate moment filming for Earth was in the helicopter getting those wonderfully special images of the polar bear swimming in the ice,' Fothergill says. 'It was a very beautiful image, but also it seemed to me it was a fantastic symbol: the world has disappeared beneath the feet of this large carnivore, and in a sense it was emblematic of the fragility of our planet.'

The film-makers say that filming the lions was not as tough as capturing the elephant trek. 'For me, the scene of elephants battling a sandstorm in the Okavango delta is one of the most powerful in the whole movie,' Linfield  reveals. "From our chopper above the storm, we could see everything. It was elephants versus the elements. It was just raw, natural drama. The lengths that one mother went to in order to save her calf was so uplifting and yet, moments later, the dust cleared and it became apparent that another calf was lost. And from high overhead, we could see what that little calf could not -- it was walking in the wrong direction into the middle of the desert. There was nothing we could do to help it.'

Among the film's many heartfelt moments is the scene in which a whale calf receives over 600 quarts of milk a day from its mother, but the mother is starving. There is hardly anything for her in the clear tropical waters. So begins another journey, across 4,000 miles. The journey fraught with danger also offers spectacular and dramatic scenes like the whales encountering hundreds sailfish rushing at nearly 70 miles an hour in search of prey.

The film does not have a single human character but that is fine says producer Sophokles Tasioulis, adding there is enough tension, bonding, romance and adventure in the film. 'They are heroes in a very traditional way,' he adds. 'They have their battles, they have their defeats, they have their victories, so you sympathise with them, you feel with them, and that's what you want to have in a big-screen drama.'