Agyaat: Watch it to believe it! 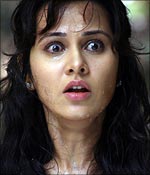 I just got back from Agyaat and I am not done laughing yet.

Ram Gopal Varma's thriller is seriously, decidedly, indisputably funny -- in the ridiculous dialogues recycled by the characters (seems the writers ran out of words), in the forced, schmaltzy romantic interludes, and even the way almost all the characters in this ensemble cast are hurriedly bumped off or turn suicidal so that the lead pair can carry on with their lives.

Forget the preamble, and let's cut to the chase. Here are some compelling reasons why you should watch Ram Gopal Varma's latest re-launch pad for his old muse Priyanka Kothari (aka Nisha Kothari):

You will want to watch it because the monsoons are waning, it is hot outside and the chilling air-conditioning in the theatres works much better than the purported chills of the movie.

You want to know what a reputed director does in his spare time with his spare group of lackeys and technicians. Well, he goes to a jungle and makes his characters play Ringa-Ringa-Roses around the same spot, dunks them in water and bumps them off. The more irrelevant you are, the earlier you die.

You want to play the guessing game with your friends in which everyone will be a winner. You know when a motley crew gets stranded in a jungle, they will all be bumped off one by one. You know when frogs croak loudly and bees buzz angrily, something is not right. You know, when the camera sneaks up on a character from the back, he/she either dies or it is a false alarm. The list goes on and on and on...

You want to see how a director gets to bastardise a classic scarefest such as the Predator, and have the gumption to promote it the way he did. No self-respecting filmmaker will ever want to claim credits for as shoddy a product as this. You are curious to know what Varma was on when he made this. 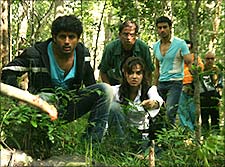 You are a fan of Priyanka Kothari, and want to see for yourself what a spectacularly bad actress she is and how Varma has the innate ability to make all his leading ladies look the same, move the same way and strip at the slightest excuse -- this time, it is the damn leeches. But small correction, when a leech latches on to your body, you don't feel a thing. Not until someone else spots it. Law of the jungle Mr Varma.

You want to see what Varma does with an elephant, a monkey and two snakes in his cast. They make guest appearances, because they are friends with Varma, whose forest fixation had endeared him to the inhabitants. In fact, you can almost imagine him swoop down on the audience from the tree tops with a George of the Jungle-yawp! 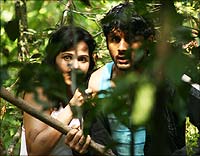 You want to play along with the makers of this travesty in the name of a thriller, whose sole intention seems to make a fool of the audience and make you part with your money. You don't know a better way to blow up 200 bucks.

And finally, you want to know how to put your audience to sleep, as you waste precious minutes showing your characters form a single file and walk through the jungle, looking very, very scared and make startling, insightful observations such as, "Raat hone wala hai!" (when the sun is waving at you cheerfully!), "Hum ek ek karke mar rahe hain!" (thanks for pointing it out mate, since the audience has lost count already, and interest!) and the likes.

One of the characters says this about another, "Woh joker hai, hume bhi joker banaa raha hai!" Now, what could he possibly be hinting at? Hmmm...we wonder...

Will Priyanka's bikini lure in crowds for Agyaat?