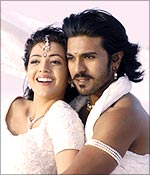 Telugu star Chiranjeevi's son Ram Charan Teja's new film Magadheera may be creating box office records in India and abroad but the film has been a target for some people in Andhra Pradesh and Karnataka.

In Andhra Pradesh, Magadheera has been banned in the Vijayanagaram district because it saw death of five film enthusiasts due to a short circuit in the Lakshmi Srilakshmi theatre in Sulur. Earlier many Chiru fans had succumbed to a stampede in theatres because of the heavy rush.

Magadheera producers have announced a compensation of Rs 11 lakh for the victims.

The deaths in Srilakshmi theatre were enough to provoke the ruling Congress party's Panchayat Minister Botsa Sathyanarayana to order to ban the film. Since Sathyanarayana cannot legally address the issue, his extreme step has been severely criticized by the Praja Rajyam party cadres.

"This is nothing but a political conspiracy to restrict Chiranjeevi's growing popularity and his son who has become a star in the Telugu film industry," says Praja Rajyam's office bearer Gymnassium Ravi.

However, the Congress party defends the minister's actions.

Sathyanarayana says that since theatres in the district are not fully equipped to screen big films like Magadheera, he has decided to ban the film in the district of which he is the in-charge.

Magadheera's problem in Karnataka is totally different, however. It relates to the disgruntlement among the Kannada film producers, who are worried that big films like Magadheera will expand the screening opportunities of non-Kannada films, much to the detriment of Kannada cinema. They allege that Kannada films are getting a raw deal from theatres around the state.

On Tuesday, nearly 40 Kannada film producers staged a dharna in front of the Karnataka Film Chamber of Commerce in Bangalore, protesting against the injustice meted to Kannada films by theatre owners and distributors who were violating the regulatory rules of the film chamber. They charged that the distributors of non-Kannada films were using oppressive tactics to expand their film screening opportunities.

Incidentally, Magadheera is being distributed by Vijayakumar, who is also the secretary of Karnataka Film Chamber of Commerce. The film is expected to rake in more than Rs 3 crores in just two weeks of its release in Karnataka and has the potential to cross Rs 5 crores.

Bowing under the pressure of  the Kannada film producers, the Karnataka Film Chamber of Commerce has now suspended Vijayakumar, charging him with violating the norms of release of non-Kannada films.