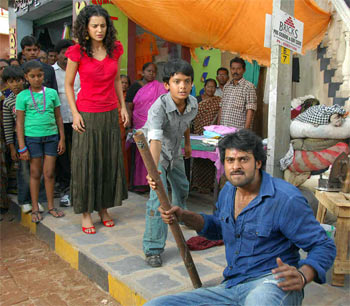 Puri Jagannath, one of Telugu cinema's hotshot directors, is in the process of shooting his latest film Ek Niranjan. Hindi heroine Kangna Ranaut is all set to make her debut in Telugu in this film. She will be seen opposite the tall and lanky Prabhas.

After Bujjigadu, Made in Chennai last summer, Puri and Prabhas are coming together the second time. Puri's films are typical masala flicks and it looks like Ek Niranjan will be following the same formula though there's nothing much known about the story line so far.

Kangna's debut in Telugu will be looked forward to as she has proved her mettle in Hindi films like Gangster, Woh Lamhe and Fashion.

Besides Kangna, Ek Niranjan will also star Hindi actors like Sonu Sood, Mukul Dev and Makarand Deshpande. Sonu Sood has become a regular in Telugu films with Arundhati in which he proved his acting credentials.

Manisharma scores the music while Shyam K Naidu handles the camera for this film produced by Aditya Ram.