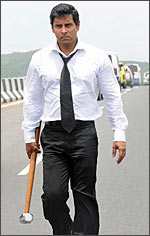 Mallana, the Telugu remake of the Tamil film Kandasamy is a commercial potboiler laced with a message, which is contemporary yet something old that has been plaguing the country for many centuries -- the issue of disparity between the have and the have-nots.

Director Susi Ganesan spins a yarn of the untold wealth of the rich distributed amongst the poor and the needy through a super-hero. The film is technically sound -- particularly the camera work and special effects. Great effort has gone into creating the special effects and selecting some of the locations, particularly Mexico.

Mallana (Vikram), an IPS officer working with CBI is a 'modern' Robin Hood. Under the name of Mallana (which is also another name of Lord Shiva), Mallana goes about doing super-human deeds to help the downtrodden. He listens to the woes of the poor after they write letters to Lord Mallana. He receives able help from his superior (played by thespian Krishna) and his gang of 11 friends. Mallana hunts all the rich businessmen and loots their money.

He runs into Subhalakshmi (Shriya), daughter of PPP (Ashish Vidyarthi), one of the businessmen he usurps the money from. Both Mallana and Subha play a cat-mouse game till they fall in love. Mallana does not spare PPP's wealth even in Mexico.
Similarly Mallana targets another rich guy Rajmohan who has a plush caravan like bus with all the facilities which he travels in. Both these men are up against Mallana. Another IPS officer (played by Prabhu) is trying to figure out who the super hero is.
The theme of the story is good. But it's nothing new and has been treated in the formula pattern and therefore has all the routine stuff including an 'item' number by Mumaith Khan in the bus.

The special effects for the super hero are the only new aspect. It's quite intriguing to see the super hero who at first, like an 'eagle', swoops down and flaps his so-called 'wings' but after a point it does not arrest attention. The message of wealth being amassed by the rich (including politicians) even in Swiss banks is mentioned and how it would benefit the poor if distributed among them. Haven't we seen enough of such films before?

Susi Ganesan's screenplay in the first half is engaging but tends to drag in the second with more song breaks. There's quite a bit of confusion and no rationale or logic at times in the screenplay. The film seems to be drawn from Sivaji and Aparichitudu. 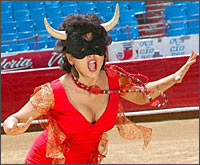 The inordinate length of three hours is quite a deterrent and one can feel the tedium especially post-interval. There is no doubt that producer Thanu and director Susi have spared no efforts to make a grand extravaganza but in the process have delivered a film which seems a bit inane at times.

Vikram looks the super hero but one is a trifle disappointed as there's not much scope for him to act in the film. It is not that kind of a role which has a spectrum of emotions to deliver. Nevertheless he does a good job of what he has been given. He looks fit and trim and glides through the dances and action sequences well.

Shriya looks hot and sizzles on screen. She's flaunts her well-toned body quite a bit and looks a sexy siren too. Ashish Vidyarthi is like the normal villain. Prabhu does his role well.

Devisriprasad's music sounds good on screen especially the Allegra song (the choreography too is good). N K Ekambaram's cinematography is good and particularly excellent in the parts shot in Mexico where the camera pans the rugged landscape beautifully and in one or two songs.

Mallana is heavy on slickness and technical finesse and less on content with too long a running time. Watch it if you are stuck on commercial stuff!

Composing for a hero