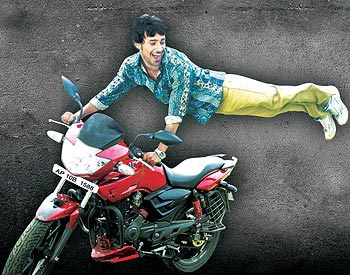 The Tamil film Polladhavan directed by Vettrimaran starring Dhanush and Divya Spandana was a huge hit in Chennai. Two years later, the Telugu remake, titled Kurradu, is being made directed by cinematographer-turned-director Sandeep Gunnam (son of Gunnam Gangaraju). It's his maiden directorial venture.

It's the fourth film for young hero Varun Sandesh who will be essaying a different role in Kurradu compared to his lover boy roles in the three previous films. Neha Sharma (of Chirutha fame) returns to Telugu films after a two year hiatus.

Polladhavan is supposed to have been inspired by the Neo-realist classic Bicycle Thieves of De Sica. Of course, in the Indian versions, the bike replaces the bicycle. Polladhavan was a contemporary, slick and stylish film about the travails of a youngster when he loses his bike.

Kurradu which is produced by Gemini Kiran is slated for a Dasara release. Achu has composed the music.