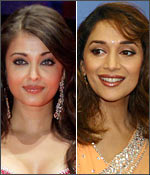 Aishwarya Rai Bachchan and Madhuri Dixit Nene may come on board as judges for a new dance reality TV show.

Sony Entertainment Television's Dance Premier League is expected to be launched on a grand scale on October 9. Auditions will be held in all the major cities in India.

According to sources, Ash and Madhuri -- who last shared the screen in the 2002 film Devdas -- liked the show's concept and showed interest in being a part of the show. Ash has already started working on her dates.

Javed Jaffery or Arshad Warsi may step in if the dates do not work out.

Choreographer Shiamak Davar has been confirmed as the third judge.

Sara Khan -- the beautiful actress in Bidaai -- is likely to host the show along with Ejaz Khan.