Toss is a laughable attempt 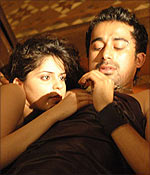 Watching crummy movies can do crazy things to your psyche. Toss is one such movie.

It's so unbelievably obnoxious that it's impossible you will come out unscathed. Clearly, that's not a compliment. For one, it opens up a nagging albeit well-meaning voice in the head which insists, 'Get up and get out.' That, however, isn't an option for the often-derided reviewer. So instead, you sit back and suffer.

Except, like I said, the voice won't shut up. And so, all through it keeps hitting a new wave of realisation that strives to describe Toss differently. Here are a few samplers:

Toss is about a bunch of creepy 20-something's (Prashan Raj, Ashmit Patel, Rannvijay Singh, Aarti Chhabria and Madhurima Banerjee) finding the lamest excuse to clumsily make-out in the middle of a deserted forest while mouthing the corniest dialogues. Or maybe it's about those very dimwits bumping into two metal cartons filled with millions and letting greed get the better of them, if at all such a thing is possible.

Toss is about a gangster trio of three brothers -- two expletive-darting adults (Mahesh Manjrekar and Sushant Singh) -- with a thing for sharp objects that can slice all things alive and a roly-poly, twisted, gamer boy who shares their enthusiasm in these sickly activities.

Toss is about Rajpal Yadav's ghost, dressed in yellow beach attire with a hat, lurking in an old Goan villa during the first half. In the second, his spirit too does a mysterious vanishing act. Lucky bugger!

Toss is actually a confused horror film in the garb of a thriller that seems to have lost its script to the washing machine. Nine times out of 10, when they have run out of things to say, the makers employ the easiest trick in the book -- play a loud background score while the protagonists deliver mock lines. 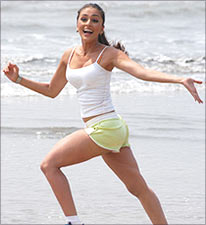 Toss is a laughable attempt at a black comedy. The afore-mentioned gamer kid punches a dagger into his already stabbed victim. Previously, he's also had the pleasure of watching a naked guy getting slashed to pieces while he played Sai bhajan on his music system.

Toss is the kind of movie where perverted zombies inhabit the planet and pronouncing Da Cunha (Zakir Hussain) incorrectly amounts to a joke.

Toss is the A to Z of a rambling screenplay and tacky production values. One moment three guys are chasing one. Cut to the latter beating his chest in front of a Cross of Christ, 'Kill me, kill me.' Next scene, you have a stock-withdrawn mother emphasizing on the exceptional status of a live-in relationship to her unusually panting son.

Toss is a text-book demonstration of appalling, over-the-top and awful performances. Not one actor in a cast of mostly lesser known faces project anything remotely to an expression.

In all likelihood, this is not the last of the worst I've witnessed. Nevertheless, it's neither head nor tails (read stars) for Toss.

This film deserves no Rediff Rating.