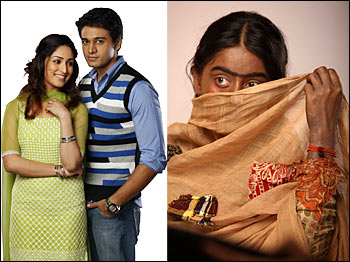 Lagi Tujhse Lagan revolves around Nakusha, a housemaid, who has to live her life behind a veil of ugliness in order to protect her virtue. The show is produced by Paresh Rawal and has been inspired by a real life incident. Rawal had witnessed a similar situation when he was 14 years old.

"There was a maid called Manjula, who was working with a relative of mine," Paresh Rawal said. "She was ill-treated by everyone because she was very dark and not good looking. My relative had four daughters but they were too lazy to do any housework. Manjula cooked good food but was not allowed to come in front of guests. She would happily do all the work hoping that one day she would get married like my relative's daughters. One day, we got a call from my relative that she has run away from the house.

"Why complain about racism when we ourselves are doing it here? Being dark is one of the biggest stigmas in our country. Why is the definition of good looks always associated with fair complexion?" Paresh Rawal continued. "I was only 14 then so I could not help her. Now, I want to tell her story to the world. So I pitched the story idea to my production partner Hemal Thakker. Some changes have been made as per the requirement of the story to make it more interesting."

Will there be a beautiful face hidden behind the ugly one, like we saw earlier in Jassi... Jaisi Koi Nahin? "No, nothing of that sort will happen in the show," the actor clarified.

According to sources, this is the ploy of Nakusha's mother, to keep the real beauty of her daughter under wraps. She does this in order to shield her daughter from the evil eyes of the society.

"This show will connect the audience with reality. It will not be like the other daily soaps where the protagonists wake up in the morning with full-fledged make-up on, and in tip-top condition," said Paresh.