Following relentless attacks on Transformers: Revenge of the Fallen last week, the critics have turned their guns on another sequel, Ice Age: Dawn of the Dinosaurs. Now it is to be seen whether the moviegoers, who so often reject the critics and embrace a film, will welcome Ice Age 3.

Summer films in particular are critic-proof. As Transformers director Michael Bay said the other day audiences get his movies while the critics just do not. The $200 million Transformers is on its way to recover the basic production cost in just two weeks, thanks to the $500 million plus it would be grossing. Angels & Demons was yet another summer release slammed by major critics, and yet the film is racing towards a $500 million worldwide take.

So even when major critics are asserting how awful the new Ice Age film is, young audiences across the globe could make the film a hit.

In the new Ice Age, audiences will discover that life begins to change for Manny and his friends after the events in the previous Ice Age film.

Scrat is still trying to hold onto his beloved acorn, while chasing a squirrel, Scratte.

Manny and Ellie are expecting a baby, with Manny being too anxious that the baby should have all the comforts.

Diego, who wants to be bold and mature, worries he has become too lazy.

And Sid runs into trouble when he steals dinosaur eggs in the hope of starting his own family. When he lands up in a strange underground world, his friends must act fast to save him. 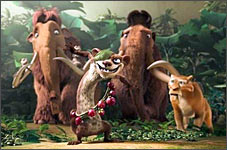 If Ice Age 3, which is expected to gross at least $500 million worldwide, stumbles and makes half that money, it still would not be losing money. The film cost about $125 million, unlike several kid-friendly films costing $180-$200 million. One reason why it may not soar very high could be because the much praised Up, which has grossed a smashing $250 million in America, has still some life left. And it is expanding in Europe and Asia just around the time Ice Age 3 is playing there.

Among the most savage reviews the new film has received was from Newsweek which headlined the story, Give Ice Age 3 Cold Sboulder. The backup headline declared: Viewers may go extinct waiting for laughs from Dawn of the Dinosaurs. 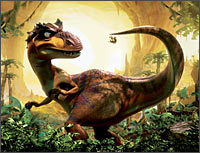 USA Today headline also had a warning: 'Recipe for an Ice Age mess: Thaw, rehash, refreeze Ice Age: Dawn of the Dinosaurs seems to be suffering from freezer burn. Once fresh, the story is now buried under a hoary coating,' the review said. 'The theme of creating unlikely families worked well the first time from both a comic and narrative standpoint. Its consistently sweet message notwithstanding, the retread plot is a bore.'

Ice Age: Dawn of the Dinosaurs seemingly exists only to give parents and children an air-conditioned activity between Up and the upcoming Ponyo,' the review said, adding, 'Not that going to the mall and lingering over sno-cones in the food court wouldn't be a more entertaining day out.'

In a week we will know if the film's director Carlos Saldanha is having the last laugh or not. He could argue, like Michael Bay, that his film has captured the hearts of the audiences worldwide. Or he may be thinking why the film did not work as per the expectations.