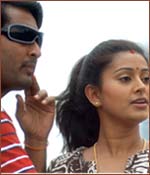 In many ways, Project East-West and LLC's production, Achamundu! Achamundu! (There is Fear; a direct take on Bharathiar, who penned the immortal words Achamillai, Achamillai - There is No Fear) -- directed by Arun Vaidhyanathan -- is different. First off, the movie's been shot completely in the US, using the Red One camera technology and the plot certainly is nothing you've seen in Tamil cinema in aeons.

It's rare enough to take a knot like that but it gets even better with a perfect casting. Senthil Kumar (Prassanna) and Malini (Sneha) are a happily married couple in New Jersey, living life like any other born-in-India, arrived-in-the-US couple do. He submerges himself in the office and eats sambhar rice at home and she never misses a bhajan at the temple and shops at Indian stores. They have a daughter Rithka (Akshaya), the apple of their lives (their car's registration number carries the name of their daughter.)

They've just settled down in a new, spacious home about which Malini, understandably, has fears. The couple squabble amicable about everything from her perpetual laundry and cooking; while Senthil argues with friends about the significance of viboothi and takes his family on weekend trips and birthday parties. It's a normal, happy life in the US until Robertson (John Shea) arrives, to paint the basement.

Robertson's unusually kind behaviour towards children sets off warning bells in your head especially when he's shown to be a paedophile who exercises like mad within the confines of his home, always moving on towards his next target. Your blood pressure rises when he arrives at Rithika's home, presumably to paint but with every intention of carrying out an assault.

It's been a long time since you saw a couple with such onscreen chemistry. Prasanna and Sneha have simply lived their lives, instead of acting, and this does much to push forward a film that might be called a bit slow in pace.

Logic and reasoning, however, play a great part in the screenplay, written by Arun Vaidhyanathan, and that keeps you keenly interested in their lifestyle, their conversations peppered liberally with references to life in India. Watching someone else's life through a microscope is always intriguing and this couple does it with such style and verve that you can't help applauding it.

And then there's John Shea, who impresses you with his superb body language and expressions. A marvellous piece of work. As a paedophile with only one intention, he really does give you shivers.

The pace is a tad too slow, and the climax doesn't really seem to do justice to the meticulous writing and screenplay of the first half but then those are points you can overlook, as the superb casting, natural dialogues, acting and Karthik Raja's soulful music have much to recommend them.

For the guts in coming up with a unique, important theme that needs to be addressed sensitively, this movie works. A must-watch.