News
Business
Movies
Sports
Cricket
Get Ahead
Money Tips
Shopping
Sign in  |  Create a Rediffmail account
Rediff.com  » Movies » Only music can save Jashnn

Only music can save Jashnn 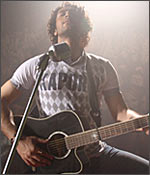 When I met directors Raksha and Hasnain, I had quite some expectations from their next film Jashnn - The Music Within. But when I finally watched it, I was left disappointed.

Thankfully, this time they were not 'inspired' by Hollywood films -- like their earlier directorial outings, The Train and The Killer.

But what the story gained in originality, it lost in predictability. Halfway into the film, I knew exactly how the film would end.

The story is very simple. Akash Verma (Adhyayan Suman) is a self-proclaimed musician. The film starts with a scene of Akash sitting in the middle of an empty stadium, singing and strumming on his guitar, and imagining the stadium to be packed and roaring with applause. And then the watchman interrupts.

All that is fine. Only because Adhyayan doesn't get to say much in all that time. When he does talk and perform, he needs much improvement. He needs acting classes. He was much better in the latter half of his second film, Raaz - The Mystery Continues.

Secondly, since you're playing a guitarist, Adhyayan, please learn some chords. Holding the same G chord throughout will definitely not make people believe in you. 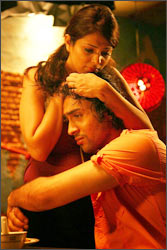 Akash's sister Nisha (Shahana Goswami) is the breadwinner of the house -- by sleeping around with Aman Bajaj (Humayun Saeed). Aman is a married businessman, who takes care of the brother-sister's finances.

After a few events, Akash leaves home to make a living.

Enter Sara (Anjana Sukhani), a US return, who falls in love with Akash, and calls him and Nisha home to introduce them to her brother -- you guessed it, it's Aman Bajaj.

Akash then strives to realise the dream he started off with in the film.

Shahana is a wonderful actress and has done an exceptional job in the film. But girl, you desperately need a good fashion designer. Her outfits in the film are terrible.

Newcomer Humayun Saeed is quite the surprise package. He completely overshadows Adhyayan. He has by far one of the best villains, who can steal the audience's heart.

Jashnn really does not deserve any stars. The only rating it will get is for its terrific music. The song, Aaya Re, is the film's lifeline. Three cheers to the music directors Sharib Toshi, Aftab Nauman and Sanjay Chandelier.