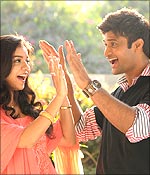 A R Rahman may not have composed music for Satish Kasetty's Telugu film Kalavaramaye Madilo but he is omnipresent in it.

Shreya (Swati), the protagonist of Kalavaramaye Madilo, dreams of auditioning for Rahman. This forms the essence of the film around which is structured a love story and family drama. It is a film with a lyrical title and has music as its strongpoint.

Director Satish Kasetty charts a known terrain but in the age of masala films heavily topped with songs, dances, item numbers and foreign locales, his film, Kalavaramaye Madilo, sans all this, is a roller-coaster ride of emotions. Swati's emotional reel journey is so brilliant that she makes you want to see her in every frame.

Shreya, brought up her mother (Delhi Rajeshwari), is studying for her Chartered Accountancy and finds a part time job as a singer in a hotel to earn money. Her mother is kept in the dark about her singing, as she is averse to it. The reasons for it are revealed later.

Shreya meets Sreenu (Kamal Kamaraju) in the hotel and slowly strikes a friendship with him. Sreenu is actually on a six-month stint in India from London. The 'love' element is built up well. One night Shreya is humiliated by Rao (Vikram Gokhale) in front of everyone in the hotel for her bad singing. Sreenu then tells her that she has to get her basics right, and has to learn under Rao who he has found out is the best teacher in town.

Shreya makes an effort to become his disciple but it's not an easy task. She finally succeeds. Her next hope is to give that audition. But there are certain truths she discovers while at her guru's place. The film then is all about whether she gives the audition to Rahman and the turmoil in her mind.

The inspiration of K Vishwanath is visible, yet it is indirect and subtle. The character of the guru seems to be a character looming large from Vishwanath's canvas. But Satish chooses to be different from the master filmmaker. Though he chooses music, it is not compositions of the maestros which are sung in Kalavaramaye Madilo as in Shankarabharanam. Also, the love story is a rather urban one.

There is enough drama in Satish's story-telling but nothing new as far as the elements are concerned. It's just the way the different constituents are pieced together along with melodious music and a good background score that make for an interesting watch. The film is an emotional tear jerker as it is melodramatic but does not go over the top.

For a change, one sees the picturesque backwaters of Kerala and tea plantations of Munnar in the two song sequences instead of the run-of-the-mill foreign locales.

Sharrath Vasudevan has done a good job as a music composer and by getting Chitra to sing has added more sweetness to the melody. His debut in Telugu is worth it.

The film revolves around Swati and she is absolutely exceptional. Swati glides through the kaleidoscope of emotions smoothly when the ride is actually difficult and warrants a portrayal of many. But the felicity she displays is remarkable. Her oodles of talent come to the fore in this movie wherein she switches from the vivacious to the serious (in the character) with utmost ease.

Kamal is cool as the NRI from London. His body language is apt and makes a good pair with Swati despite the height difference. Tanikella Bharani (who plays Sastry, Vikram Gokhale's friend) is a doyen himself and nothing need be said about his acting. For, it is understood that he acts superbly. The same thing applies to Vikram Gokhale who puts in a restrained yet effective performance in his debut Telugu film. It's a treat to watch these two senior artistes on screen.

On the technical front the film is okay.

This heroine-centric film is appealing and makes for a worthwhile watch. Just go and enjoy it and let the cascade of emotions engulf you. You would probably come out and say Jai Ho to this film and cast.