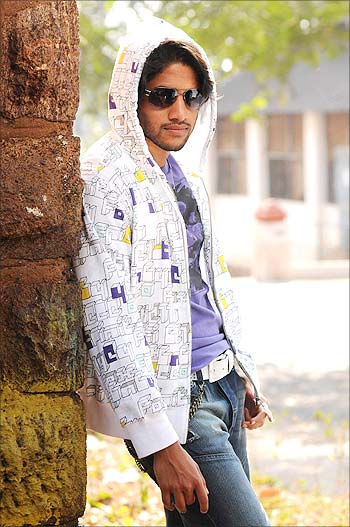 It's the turn of another son to rise in Telugu filmdom. The debut of Naga Chaitanya, (Nagarjuna Akkineni's son, Akkineni Nageswara Rao and D Rama Naidu's grandson and Venkatesh's nephew) is keenly awaited with all the necessary 'Josh'.

Well, 'Josh', which will mark his maiden entry into tinsel town is being produced by none other than 'Dil' Raju, the man with a Midas touch. Nagarjuna is not introducing his son under the Annapurna Studios banner. He has left it to 'Dil' Raju to create the magic.

Josh is directed by debutant Vasu Varma.' Dil' Raju has taken personal care at the script stage itself and ensures that his script has the perfect ingredients for the blockbuster success.

Besides Naga Chaitanya and Vasu Varma, 'Josh' has a third debutant too in the form of the heroine, Karthika. She is the daughter of yesteryear heroine, Radha. It did require some persuasion to get Karthika into films.

JD Chekravarthy, who played villain in Nag and Ram Gopal Varma's path-breaking 'Shiva', is reprising the role in 'Josh'.

Sandeep Chowta has scored the music, the audio of which was released recently at a grand function.

Sameer Reddy handles the camera while Marthand K Venkatesh is the editor.

With a tagline "Youth Rocks", let see if Naga Chaitanya and Karthika will be able to rock the box office with all this 'Josh'.