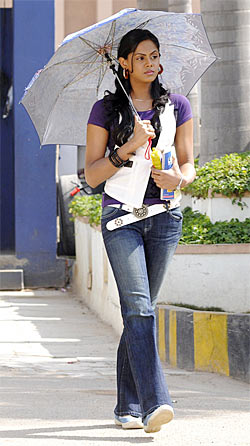 Karthika, Naga Chaitanya's heroine comes from an impressive lineage. Her mother, Radha and her aunt, Ambika ruled tinsel town in South India in the 1980s and 1990s. They acted with all the top stars and actors in all the South Indian languages.

And now Karthika is all set to follow in her mother and aunt's footsteps by making her maiden appearance in the Telugu film Josh opposite Nagarjuna Akkineni's son, Naga Chaitanya. The film will hit theatres on August 12.

The dusky Karthika, who grew up in Mumbai, is doing a Telugu movie at the behest of her parents Radha and Rajasekharan, a restaurateur. She has been interested in dance since childhood.

Radha and Ambika were present at the grand audio release function held in Hyderabad recently. 'Dil' Raju is the producer and debutant Vasu Varma is the director of Josh.

Expectations are high for Josh as it has many debutantes -- Naga Chaitanya, Karthika and Vasu Varma.