In Frozen, the first film opening nationwide in what seems like ages (but is really more like five or six weeks) we are witness to the life of Karma (Danny Denzongpa) and the trials and tribulations that visit those like him who live high up in the winter wonderland that is Leh, Ladakh.

There is a daughter named Lasya (Gauri), a son named Chomo (Skalzang Angchuk) and a dog named Singhe. In the flurry of activity that takes place in the opening sequences we learn that Lasya has conned her way out of school earlier than expected, it appears that Chomo doesn't go to school at all and Karma is struggling to work a machine that helps him make apricot jam. 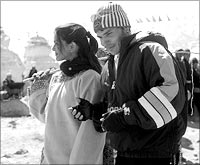 Not long after he has finished producing his latest batch of preserves the army arrives to carry out 'exercises' for a couple of months and takes up station in the vicinity of his home. They drop off a radio with which he can communicate with them at any time and proceed with the business of building a camp, fencing it off with barb wire, and running drills and exercises while shining bright lights all around the region throughout the night until falling asleep becomes a Herculean task for the hardworking man and his family.

Screened in eye-popping black and white, Frozen is more a meditation of life and the passage of time than it is a story with conventional cinematic accoutrements like protagonists, antagonists and a narrative arc. There is a narrative but it appears to be in place merely to help the viewer process the glacial pace of life way up there in the far reaches of our country. Nothing is easy, nothing is a phone call, text message or an email away and nothing is quite what it seems.

In a country as overflowing with life as ours is, it is amazing to see a region, within our geographical boundaries, where it is difficult to run into another living being for miles, except by design. 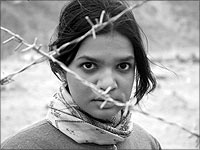 Of the cast, Danny Denzongpa is outstanding -- one feels his pain, experiences his struggle and knows that there is more than one such man out there in the world today. He is the spine of this story as well as the reason to persevere with it to the end.

The landscape is an equally powerful character in the film and it succeeds in both filling us with awe (because of its beauty) and fear (because of how insignificant we are, each and every one of us, when faced up with the vastness of it all). Most important of all is the way this film looks.

Shot by Shanker Raman this movie is literally one of the most beautiful Indian films ever committed to celluloid. Given that this film has such a limited colour palette (can one even call black & white a colour palette?) it is amazing how much depth and range the filmmakers have been able to extract from their moving images. Throughout its one hundred and seven minutes' running time, this film looks like a Life magazine photo spread come to life.

That being said, art direction and cinematographic wizardry alone cannot guarantee box office success so one has to wonder about director Shivajee Chandrabhushan's motivation for making a film like this. Beautiful though it may be, Frozen is pretty inaccessible storytelling. Not just because the wide vistas and slow moving pace of life in the film intimidate and distance (not necessarily in that order) but also because in the final analysis the film fails to tell a coherent tale.

Perhaps the gaps in the storytelling and the jumps in the narrative were intentional or maybe the filmmakers just didn't get all the shots they needed to stitch together the most comprehensive story about life in extreme conditions. Either way, though the director and his team deserve the highest accolades for achieving a film of this level of beauty in severely extreme conditions, it is unlikely that this film will find a mass audience. Connoisseurs of high art however will probably find much to appreciate in this sparse and beautiful black and white world.