Robert Langdon is back, in the first major Hollywood summer release to grace our shores since the designer adrenaline of Fast & Furious all those many weeks ago. This time around he is investigating the reappearance of a secret society long-believed dead (or a figment of overactive imaginations) as events unfold during one tense night around Rome and the Vatican.

In the chronology of books written by bestselling author Dan Brown Angels & Demons featured the first appearance of Professor Langdon, a Harvard 'symbologist', but this film has been rewritten to play as a sequel to The DaVinci Code.

Langdon's help is enlisted by the Vatican after four cardinals are taken hostage and threats made upon their lives.
That these events occurred during the process of voting for a new Pope (after the sudden death of the previous one) complicates matters; but the icing on the cake is the existence of a canister of 'antimatter' -- a heretofore unknown substance -- that is scheduled to cause a cataclysmic explosion somewhere within the limits of the Vatican if it is not discovered and deactivated by the attractive woman on hand for just this purpose. So everybody involved is in a race against time to find the kidnapped cardinals and prevent the deaths of the hundreds of thousands gathered in St Peter's Square to witness the election of the new Pope. 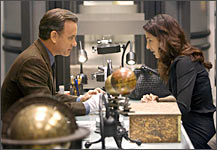 While Tom Hanks returns as the professor/detective, he is surrounded by a new cast of players, including a new female companion/sidekick in the form of Vittoria Vetra (Ayelet Zurer), a researcher at the facility that first distilled the antimatter that everyone is rushing to find. He comes up against Commander Richter (Stellan Skarsgård), the head of the Swiss Guard, who does not believe that they need the assistance of the symbologist to find the cardinals or the canister. Also in the mix is Camerlengo Patrick McKenna (Ewan McGregor), the deceased Pope's head administrator, and Cardinal Strauss (Armin Mueller-Stahl) who serves as the Elector of the conclave that convenes to choose the new Pope.

Unlike the previous movie that moved as quickly as a snail on vacation, Angels & Demons wastes little time getting from Plot Point A to Plot Point B, and onwards. Effective edits and sharp changes of pace and location are employed to ensure that the audience's eyes remain glued to the screen throughout the nearly one hundred and forty minutes running time.

Setups are efficiently established, puzzles are revealed, chased, solved and new puzzles delivered. Obscure anecdotal history is delivered in pithy dialogue and very little time is wasted setting up the universe for those audience members who aren't already in the know. 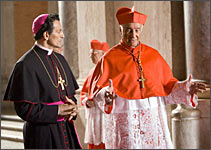 Having lost an appreciable amount of weight since his last turn as Langdon, Mr Hanks looks more in command of his performance and the physical agility it sometimes requires (in addition to mental quickness). The Israeli actress who plays Vetra manages to bring equal amounts allure and seriousness to her character without having too much to do or say. The rest of the cast delivers serviceable performances and the twists and turns will only come as a surprise to those who haven't read the book. A lot of people, myself included, believed that A&D was a better book than its more successful successor and that is also the case with the movie.

The set decorations are fantastic and those who have visited the Sistine Chapel, or St. Peter's Square, would be hard pressed to believe that the scenes in the movie were shot on a recreated space (because the filmmakers were denied permission to shoot on the Vatican) instead of the actual location.

Also, because director Ron Howard and his screenwriters David Koepp and Akiva Goldsman keep the film moving from the get go, there is little room for questioning the more preposterous claims and lapses of logic during the actual run-time of the film. It is only when the end credits have rolled and people have had the opportunity to think things through for a bit that they will realise that there is a great deal of coincidence at play throughout the story.

Not that one is supposed to care about such things during movies like this right? There are moments of laughable computer-generated imagery in this movie and it has to be said that Mr Hanks's hair still seems to be engaged in a secret battle for Silliest Hair-do with Nicolas Cage.

Those minor quibbles aside, Angels & Demons is a satisfying serving of popcorn cinema. What more can one ask for in these final sweltering days (we hope) of summer?