'I have become Ranbir, Shahid, Saif many times' 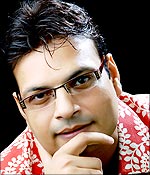 He may not be as famous as Javed Akhtar, Gulzar or Prasoon Joshi. But Irshad Kamil is getting there.

The lyricist, who has written for songs for films like Chameli, Socha Na Tha, Jab We Met, Love Aaj Kal and now Ajab Prem Ki Ghazab Kahani, is steadily carving a niche for himself.

Syed Firdaus Ashraf finds out more about the lyricist and his passion for writing.

I had no idea I would end up as a lyricist. I was born in Malerkotla near Ludhiana, Punjab, in 1971. The late (lyricist) Sahir Ludhianvi was from Ludhiana and (another popular lyricist) Anand Bakshi was from Nabha. My village is between these two towns.

I had no clue about what I was going to do when I grow up. I was just like any other boy growing up in my village. My father was a chemistry teacher in a government college and was interested in poetry.

After I finished school, I realised I had a talent for writing. I didn't realise when poetry took over my mind.

So when did poetry take over?

I completed my post graduation in Hindi, followed by a PhD (in Hindi poetry) from Punjab University.

I know how to read and write the language though I didn't take any formal lessons. If you know to read the Quran, then it is easy to learn Urdu. I have studied the poetry of Ghalib, Majas, Daag, Mir, Qatil Shifai and Dr Bashir Badar.

After I finished my graduation, I became a journalist and worked for a local newspaper, Tribune and then the Indian Express.

What made you to move to Mumbai?

I worked for more than two years in Punjab. One day, when I was covering my education beat, there was a fight at the university because of student elections. I saw some of the injured students and felt bad. Since I was a poet at heart, I realised I should not be in this profession. I couldn't do that work anymore. I asked myself that day whether I should become Khushwant Singh or Kuldeep Nayar [both journalists] and my heart said 'no'. The next day I resigned from my job.

Did you pack up for Mumbai then?

Actually, it was my destiny to be a lyricist. Director Lekh Tandon had come to shoot a serial in Punjab and I had gone to interview him. His writer had ditched him, so I replaced him right then. As there was some more work to be shot in Mumbai, I decided to come down. 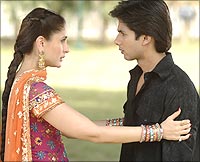 So how did you meet him?

A common friend introduced me to music director Sandesh Shandilya. I met him and versed my ghazals. He loved it and said we would work together. He asked me to meet Imtiaz Ali, and we clicked. Socha Na Tha was my first film. After that, we did Jab We Met and then Love Aaj Kal.

But Socha Na Tha songs were not that popular...

The songs didn't pick up because the publicity of the film was not done. Moreover, the timing of the release was wrong. It released on March 4 when the board examinations were in full swing. The film had newcomers and was meant for youngsters and since not many youngsters could see the film, it didn't do well. It worked well on DVD though.

So you did not go through a struggling phase.

No, because I kept getting work. I got Chameli too, because of Sandesh Shandilya. Chameli became a sort of visiting card for me in the film industry.

How do you write songs? What inspires you? Do you have to be in love to write such beautiful songs like the ones you have written for Ajab Prem Ki Ghazab Kahani?

Believe me, I have become Ranbir Kapoor, Shahid Kapoor and Saif Ali Khan many times. I look at the heroine through their eyes. I imagine the heroine's beauty while writing poetry. I always read the script before writing the songs. When you are a poet, beauties like Heer and Laila walk with you all the time. My imaginative love is more beautiful than any woman in this world. All writers and poets live in an imaginary world. They fall in love 240 times in a day. It is a state of mind. 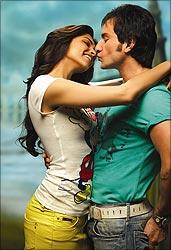 You're pushing 40. How do you manage to make your poetry popular with today's youth?

Romance never changes, only expressions do. The feelings don't change but the way they are expressed, that changes. We show the same thing in Love Aaj Kal.

A lyricist should be observant. If you are good at that, you can never go wrong. Coffee shops and malls are filled with the youth. Hear them talk and you will get into that youthful state.

Whom would you like to work with now? Yash Raj Films?

It's nothing like that. I did get a chance to work on their film with Parmeet Sethi. Shahid Kapoor and Anushka Sharma are starring in it. I could not do it because I was busy with other work. My ambition is not to work with a particular banner but to do good work.

Do you plan to write scripts in future?

I am open to it. I have written Rajshri's Tansen [screenplay and dialogue]. I want to do good films as a scriptwriter. After Jab We Met, I got 50 film offers but I did only five. I want to show my range. I'm doing films with David Dhawan (Hook Ya Crook), Vipul Shah (Action Replay), Priyadarshan and Deepti Naval.

Who inspires you as a lyricist?

Sahir Ludhianvi and Majrooh Sultanpuri. Look at Sahirsaab's range. He wrote Yeh Duniye Agar Mil Bhi Jaaye Toh Kya Hai and then he wrote Maalish Tel Maalish for Johnny Walker. The same was the case with Majroohsaab. He had a great range.

There are many. It depends on my mood. But my all time favourite is Main Zindagi Ka Saath Nibhaata Chala Gaya written by Sahir Ludhianvi from Hum Dono.