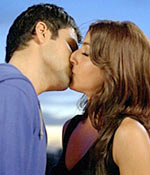 In Tum Mile, there's a thin metaphor to be found. Relationships are like the environment, messing with both leads to natural disasters. Only it's so vaguely highlighted, you won't give the nature bit much thought.

Even though the backdrop is a real one, the nightmarish rains of July 26, 2005 which led to massive loss of life and property in Mumbai. But then that all it is, a dramatic backdrop on the side, not the nucleus of director Kunal Deshmukh's second film, which alternates between a poignant flashback and action-packed present.

This fluctuating mood is also the greatest disservice to the movie, which gives the impression of being a Twister-kind of disaster flick, tries hard to ape Titanic (to the extent of lifting a scene) but follows the narrative in the tradition of Gulzar's Ijaazat.

And so, what, in fact, absorbs your attention is the breezy, effortless chemistry between two very unlikely personalities -- Emraan Hashmi and Soha Ali Khan. He lends her softness, while she brings him sophistication.

The duo play Akshay, a middle-class Indian student studying art in Cape Town and Sanjana, a wealthy girl writing articles on eco-awareness for a youth magazine, sharing a unique sensitivity if not the same social strata.

Their romance reveals itself through numerous nostalgic moments experienced by present-day Akshay, now a toy-comic book developer and Sanjana, a features writer in a Mumbai-based magazine, when they bump into each other, on an exceptionally wet day of Mumbai, several years after their split.

What's amazing is how their story and affection unfolds. The viewer feels the stifling iciness between the two in the first scene. Initially, she's a bit condescending while he's mostly awkward, which is easily believable for not all couples part as friends.

Then as the story rewinds, we are familiarised to how they met, dated, began living-in, got intimate only to experience the not so pleasant side of a man-woman relationship.

Despite the rich-poor stereotype, Deshmukh handles the frustrations and conflicts between two strong-willed, independent individuals with astounding realism. No 'khandaan ki naak neechi kar di' screeching daddies to be found. No theatrical outbursts concerning the male ego and his penniless pockets. The issues -- her tendency to mildly control him or him refusing to communicate his thoughts to her or prioritising one's career over one's personal life are comfortably relatable.

The finely nuanced moments between the two aided by Pritam's fabulous soundtrack and Deshmukh's deft direction are the winning elements of Tum Mile. It's only when the story shifts to a round of forced-adventure in the monsoon-cursed streets of Mumbai, a sense of exaggeration begins to build up not to forget a ridiculously abrupt climax.

While occurrences like human chains, blocked car doors, crying school kids, water-logged roads, drowned vehicles, crashing trees and power outage draw inspiration from true-life, they are employed like mere gimmicks to bring in some VFX-enthused thrills. The special effects, while not world-class, do an adequate job of recreating an imagery of deluge.

Ultimately, though, Tum Mile's true strength lies in the combined appeal and compelling performances of Emraan and Soha. Awe-inspiring it is not but engaging? By all means.