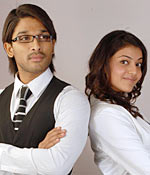 Arya 2 was being much talked of as the sequel to Arya, the successful Telugu film by Sukumar starring Allu Arjun a few years back.

Well, the sequel has the same hero-director combo but the magic is missing somehow. The sequel begins well but gets mired down the line due to the routine formulaic pattern, slightly confused plot and a not-so-proper characterisation of the hero.

The story begins in a hospital after an ambulance wheels in a patient. Ajay (Navdeep) reminisces and rewinds the clock. He and Arya (Allu Arjun) meet as orphans. Arya befriends Ajay but Ajay has a strange distant relationship with Arya. As they grow up Arya considers Ajay as his friend but Ajay treats Arya more like his bete noir. Ajay is forced to give Arya a job in his software company. Arya sports a Mr Perfect image there as he is warned of suspension by Ajay if he misbehaves. Both of them fall for Geetha (Kajal Aggarwal). Meanwhile Shanti (Shraddha Das) is in love with Arya but hers is a one-sided love affair. The film meanders along with roadblocks in the form of another character Subbi Reddy (Ajay) and the whole Rayalaseema faction thing being introduced before the climax. Arya is more of a psychotic case and this adds to the confusion.

The first half of Arya 2 makes a better watch. The scenes in the software company and the character of Dashavataram (Brahmanandam) who is the HR guy and psychologist induce much laughter. The second half simply drags -- particularly the last one hour or so where the tedium sets in as the film drags endlessly about the confusion on who is going to get the girl. It's rather baffling to see the sequences. Director Sukumar could have done better by making the film crisper and avoiding the unnecessary muddle. His characterisation of Arya's character with the psychotic tendency and obsession is bewildering.  Sukumar has, however, ensured the slickness and some of the songs are choreographed well. 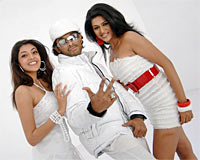 This is Allu Arjun's first release this year. He looks stylish in certain sequences and of courses dances brilliantly. The credits mention the fact that Michael Jackson is being missed but Arjun seems to be inspired enough to dance some of his steps to keep MJ's image alive. His acting is apt for the role. He looks uber cool in some scenes particularly the songs. Navdeep, as the supporting actor, could have been better though he improves towards the end. Kajal Aggarwal is the favourite of the Telugu filmmakers right now and she is fresh as a flower and chirpy too. She acts well and has good screen presence. Shraddha Das has nothing much to do besides enhancing the glamour quotient. Brahmanandam is his usual self in the few scenes evoking laughter from the audience with his hilarious lines said with a straight face. The others such as Mukesh Rishi (Geetha's father), Sayaji Shinde (Ajay's father), Ajay etc deliver what is required of them.

Rajasekhar's has done a great job with his camera and Marthand Venkatesh has edited the film well. Devi Sri Prasad's music sounds good on screen and more so with the dances.

Arya 2 is no patch on Arya which was a huge success. Sukumar seems to have tried a so-called different storyline which is perplexing. It's only the first half of the film which makes for interesting viewing, otherwise the film is the usual routine stuff interspersed with some good dances and slick technical work.