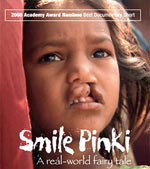 We watched the Oscar-winning documentary Smile Pinki in a hip suburban Mumbai multiplex, with a handful of doctors -- mainly surgeons -- a few kids who had accompanied their parents and the protagonists -- Pinki Kumari aka Pinka, Ghutaru, and their families. At the end of the 39-minute heart-warming film, we walked out with a smile on our faces and hope in our hearts.

In India, some 35,000 children are born every year with a cleft lip, most of them in the rural areas. Though no medical research has yet been able to ascertain the cause, the main culprit is believed to be malnutrition, due to poverty. But try telling that to the frustratingly naive families, who blame everything from the 'lunar eclipse' to 'loose morals' of the mother, for this physical deformity. The affected kids live with the severest social stigma imaginable, growing up too scared to even look at themselves in the mirror, smile, play, go to school and lead a normal life.

Pinki Kumari is one of them, living in a remote village near Varanasi, Uttar Pradesh, in abject poverty, where her father and her family have been made famous by her disfigurement.

It is a captivating story of this pretty, fearless and cheerful girl who walks barefoot with her father to the city hospital to remove the scar which has kept her away from school, friends and a decent life. Most importantly, it threatens to destroy her prospects of marriage, the only thing that matters to the artless villagers.

At the hospital, where Dr Subodh Singh conducts free corrective surgery as a part of The Smile Train initiative, Pinki is joined by hundreds of other such kids, whose chillingly real stories will leave you moist-eyed. Like the little girl whose hands are bruised and burned because of the household chores she is made to do by her poor widower father. Or the boy whose cleft lip has left him friendless and too scared to even look at his own reflection. Or the young mother, whose family rejects her for giving birth to what they call 'a monster'. 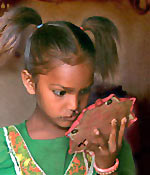 The India that emerges in these hamlets and the surprisingly clean hospital compound where hundreds gather to get their children operated, is the India that we seldom pause to look at. In the pots and pans and the barefoot journeys, the tears and the silent prayers, the anxious phone calls to families at home, the superstitions and the naivete of the wide-eyed villagers, the innocence and joy of the kids as they run around in ill-fitting school uniforms, lives the global power India.

It is an India we city slickers are either too ignorant about, or romanticise in our glossy cinemas and television commercials. Most importantly, it speaks of the inspiring work by a team of doctors and volunteers, who work patiently and dedicatedly to help children from India's poorest and remotest villages get a future.

The beauty of Smile Pinki is in its simplicity. As director Megan Mylan remarked during an interaction later, the director 'gets out of the way' so that you can connect with the real people -- Pinki, Ghutaroo and scores of other kids and their parents. There is no 'point of view' really, but a mirror of the lives of the people as it gets transformed.

Smile Pinki is a slice of life from the dusty hamlets and paddy fields, where cell phone networks have reached well before medical help.

It also puts you in a spot. As you walk out of the theatre, you'll wonder whether to celebrate Pinki's smile or be worried about why it was missing for six long years.

Will Smile Pinki win an Oscar for Megan Mylan?