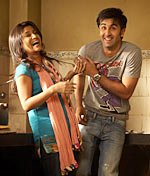 Coming of age is never an instant experience. It takes time, a sweet amount at that, before realisation hits. As if on cue, Wake Up Sid follows the tempo of its eponymous hero.

There's not much of a story to tell. It could be related in a five-minute music video -- about a boy who takes everything; family, education, comforts for granted and a slightly older, independent girl. What happens when the twain share the same roof?

And so the first quarter of writer/director Ayan Mukerji's fresh, romantic and feel-good caper about a boy-in-limbo's metamorphosis into a man-in-charge is leisurely paced, as if unapologetically echoing Sid's laidback temperament, an affable yet clueless college lad who snaps at his folks, doodles on his accounts text book to party hard at Ruby Tuesday, gaming arcades, shopping malls and discotheques with his two best friends  a plump Betty-types (an instantly likeable Shikha Talsania) and a bearded sensitive Joe (Namit Das, half-amusing), driving a sleek Honda CRV, with an exceptionally trendy wardrobe of cartoon-themed tees (Joker, Dastardly, Beavis & Butthead, Ghostbusters, Tom & Jerry, Snoopy to name a few), cute 'n' colourful boxers and a room-filled with all sorts of fanboy toys, gadgets and gizmos.

Phew, right? All these cool props to emphasise on Sid's affluent, metropolitan, spoilt character are in excess, in fact to the point of distraction. Even so, most of the aforesaid is swiftly established in a lilting Shankar-Ehsaan-Loy number, Kya karoon.

Immediately after, the momentum tires down into scenes with either one too many ungainly pauses or dialogues (by Niranjan Iyengar) that tend to ramble on. Like Sid's tribute to Mumbai is characteristically a Mumbaikar showing off the awesomeness of his city to a visitor to the extent the other feels sorry he/she hails from anywhere else. But the verbosity with which he is asked to convey Mumbai's magical magnetism, monsoon madness and insomniac charm does not appeal. What does is him quoting Dil Chahta Hai's legendary punch-line, 'Be a man'. 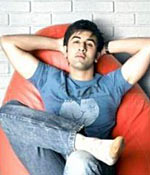 While it would be daft to dub Wake Up Sid a Dil Chahta Hai clone, it clearly pays tribute to Farhan Akhtar's 2001 breakthrough directorial debut. Ayan's Sid appears to be an amalgamation of all of the three leading men in DCH. His directionless-and-loving-it smugness is derived from Aamir Khan's Aakash. He sports a hip 'n' boyish wardrobe/haircut reminiscent of Saif Ali Khan's Sameer whilst sharing the creative sensibilities of namesake Siddharth aka Sid played by Akshaye Khanna.

An urban Peter Pan, Sid celebrates pop culture, frivolity, joblessness and Mumbai, his interpretation of Neverland, with such disarming indifference, it's impossible, even if impractical, not to like the guy. And because Ranbir Kapoor plays him so unbelievably well, you end up falling in love with him.

Frequently in the movie, Ranbir rises well above the scene making the latter look utterly mediocre in its capacity. Such is his impact. There are scenes which portray him indulging in supreme cheesiness like dishing out last-minute bread 'n' jam cakes with a matchstick doing a candle's job or slipping into his ladylove's kurta as an expression of intimacy. Any other actor would have looked ridiculous doing these antics. Not Ranbir, a complete natural, he makes it all seem cute. Also, the camera just adores this guy. Shoot him from any angle or length, he rocks.

Wake Up Sid is as much about Aisha (Konkona Sen Sharma) as it is about Sid. As the level-headed beauty looking to soar in the field of writing and nursing a crush on her debonair boss (Rahul Khanna in a spiffy cameo), Konkona treads familiar territory.  There are occasions when she evokes a strong sense of déjà vu but the actress still finds ways to make her Aisha unique with a mix of patience, warmth, effortless sensuality and wide-eyed romanticism. The unlikely duo share a sublime, comfortable chemistry, which flowers from plausibly awkward to an endearing bonhomie to something truly special in a span of two and a half hours. 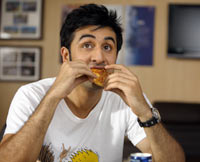 The film, like Sid's life chart, gathers momentum, meaning and melodrama post-interval. But for all its sparkling sweetness and truckloads of eye-candy, the film isn't above flaws.

You cannot fathom how Aisha on the strength of a job interview shifts into a new flat which is quickly transformed into a designer suite. The chanderi-fabric drapes alone must have cost 750 bucks per piece. It's all very visually attractive though. Considering Sid's dreamy imagination and penchant for photography, cinematographer Anil Mehta and production designer Amrita Mahal Nakai whip a tasteful theme of exuberance and youth in every single picture-perfect frame of this man-boy's world.

Digressions apart, notice that while the bond between the (an understated Anupam Kher) father-son is unexaggerated and genuine (one of the most powerful scenes involve a confrontation between the two -- the tension and frustration is almost palpable bolstered with the use of a hand held camera), the moments between Sid and his mom (Supriya Pathak's otherwise effective maternal instincts wasted in spewing silly lines) veer into forced sentimentality. Say what's the logic behind the ideology of connecting to one's brood by jabbering in broken English despite the rude response?

Wake Up Sid has its heart in place, but it still doesn't have much of a plot or novelty to rely upon. That's why the dialogues could have done with a little more quirk and nifty humour. Having said that, a superlative Ranbir makes it too darn hard to notice.

Wake Up Sid in trouble

Waking up to Ranbir, Konkona