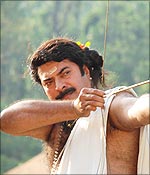 The initial response when you come out of the theatre after watching the hugely mounted Malayalam film Pazhassi Raja is pleasant surprise. Until now we have only heard complaints of financial constrain from the filmmakers for low production values and haphazardly put up story lines.

But this movie made on a budget of average ten Malayalam movies, has a quality that has never been seen before.

It is the tale of a historical superhero, narrated in a typical filmi fashion with many moments that stir up excitement in the audience. Pazhassi Raja (Mammootty) is said to have revolted against the British even before the famous revolt of 1857 began. His oft-repeated argument is -- should people who came to trade pepper and cardamom be allowed to govern us?

M T Vasudevan Nair's script has lots of cinematic moments that give scope to use Mamootty's megastar image to good use as a person who uses the capability of people from different sections of society to fight the foreign intruders.

Pazhassi who has been termed as revolutionary by the British uses techniques of guerrilla warfare against them. For this he avails the expertise of tribals lead by Thalakkal Chanthu (Manoj K Jayan). There are other people also who unflinchingly support him like Edachena Kunkan (Sarath Kumar), who is his commander-in-chief. 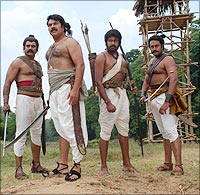 This film is technically several notches above the standard fare offered in Malayalam cinema. It would not be an exaggeration if we say that it is comparable to the best in Indian cinema.

The camera work by Venu and Ramanath Shetty give the film a sleek look. The action sequences remind us of the internationally acclaimed Chinese martial art movies of recent times like Crouching Tiger, Hidden Dragon and Hero.

Mamootty may be the hero of this film but, he does not hog the limelight. There is ample scope for other stars like Sarath Kumar and even Manoj K Jayan to exhibit their histrionic skills and use their star aura.

The ensemble of the supporting cast is also used well. Padmapriya as Neeli, who is engaged to Thalakkal Chandu has good scope to do action sequences.

If we wish to go into nitpicking, we can say that sentimentalism bogs down the pace. But that is only a minor glitch considering the overall finesse of the product.

The reunion of the team who gave us the classic Oru Vadakkan Veeragatha has a winner on its hands, if not a classic of the same proportion.

'Pazhassi Raja is an Indian film'