A stitch in time saves 9 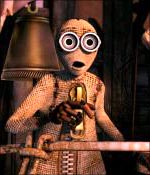 There is a peculiar poetry to be found in the sound of metal as it scrapes, tinnily or with a steel resolve, against other material. There's the clang of clumsiness, the squeak of subterfuge, and even, as Marvel devotees are well aware, the snikt of impending asskickery.

And it is in this world, the world of metal meeting wood and jute strung together with brass zippers, that director Shane Acker is at his best: working at the details and keeping it real.

9 explores Hollywood blockbuster territory, the same kind of apocalyptic human-less scenarios seen in films as varied as Wall-E and I Am Legend, but tells the story through even unlikelier protagonists. The characters -- Acker calls his fascinating humanoids stitchpunks -- are made of cloth, little robotic rag dolls, lovingly crafted by an old scientist. 9, our hero, voiced by Elijah Wood, is a burlap/jute feller with a zipper down his front; 1 (Christopher Plummer) seems stapled together instead of sewn; and so perfectly white and seamless seems 7 (Jennifer Connelly) that she looks almost leathery.

The film sets you down with 9 awakening in the midst of this nightmare, and discovering not just who he is but who the other numbers are, what devastating foes lie in the darkness, and what these nine must do to save their cloth skins and, indeed, humanity itself. The action starts from the get-go, and the film's perfectly-timed 80 minutes unfold at a breakneck pace, making sure you're caught up throughout. And even, on occasion, scared. Make no mistake, this is a summer action movie all the way, and one that does indeed deserve a big-screen viewing. 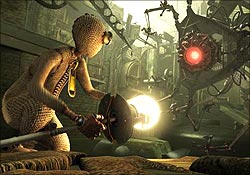 It's incredible how the lack of humans in a film both eliminates an obvious subtext while enhancing a deeper one, and the resultant emotional connect we make with these stitchpunks is a much more instinctive one than we do with most actors, at least in a film of this length. In this limited space, the director manages to give each number a certain personality, however perfunctorily. There is an interesting nod to producer Tim Burton's classic Edward Scissorhands in the way 6's fingers are made of fountain-pen nibs, and it seems no coincidence that the Scientist is voiced by a Alan Oppenheimer, sharing his last name with the father of the atomic bomb.

Having said that, the film barely taps at the surface instead of delving into it. Acker keeps the action fast and frightening, hardly getting his fingers dirty with what is happening belowdecks. The film's eventual message emerges muddled and there are times you wish the film -- clearly not a kids-only project -- would have stayed with the more mature instead of the more visual.

Yet 9 leaves you with very little to complain about. The graphic detailing is exquisite, and the film lasts only 80 minutes, staying captivating enough throughout. It could have done more, but just look at the fineness of that stitching: it truly is what holds 9 together.

And hey, you gotta love a film that vindicates George Costanza.