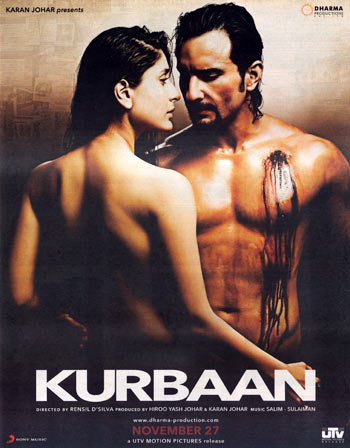 We stumbled upon a poster of Karan Johar's new production Kurbaan starring Saif Ali Khan and Kareena Kapoor, on the Mumbai daily Mid-Day.

Directed by debutant director Rensil D'Silva (who co-wrote Rang De Basanti), the film is a romantic story against the backdrop of terrorism. Om Puri plays a terrorist, and the film also stars Vivek Oberoi.

Our sources say the film has some steamy lovemaking scenes. And, we must say, the poster looks very bold!

Kurbaan, shot in Philadelphia, Delhi and Mumbai, is scheduled to release on November 27.

The magic of Aladin, revealed!