City of Gold is not for everyone 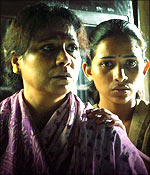 City of Gold (Lalbaug Parel in Marathi ) isn't an English film. Neither is it a Hindi film for multiplex audiences.

The title maybe a bit confusing but then so is the premise of the film. The makers claim the film is about the textile strike in Mumbai and the consequent changes in the socio-political scenario.

But the essence of the film is not political. The protagonists in the film are not the union leaders or the mill workers or the capitalist mill-owners. The central characters in City of Gold are simply occupants of Laxmi Sadan, a chawl which houses families where the principal wage earner is employed in a mill.

One such family is the Dhuri family headed by the patriarch Shashank Shende (Anna), his staunch loyalist wife Seema Biswas and their four kids. There's Baba, the oldest son whose only aim is to be a writer, Mohan who is educated and holds a steady job, Naru the small-time goon and Manju their daughter.

The siblings are poles apart in almost every way imaginable. But they have one thing in common. All of them have dreams and aspirations. Their paths may not be clear but their goal is. They desperately want to escape from the dinginess, squalor and drudgery of their humdrum existence.

But life in a chawl is not about nuclear families. And there are a whole host of other characters including Kashmira Shah (Mami) the promiscuous next door neighbour, and Sachin Khedekar (Rane) the well-meaning but ineffective union leader.

The film is set in the '80s or 1982 to be precise when the textile workers went on a strike little realising, they were playing into the hands of the management. Days turn into weeks and later months but there is no resolution in sight. Since workers had no bank balance to fall back upon, even survival becomes a Herculean task. Social norms break down, petty criminals pick up guns and violence becomes a part of their daily lives.

Director Mahesh Manjrekar must be given credit for paying due attention to detail. The entire film is set indoors and the era has been re-created painstakingly. The ladder leading to the indoor loft, the brass primus stoves, the transistors, the black and white TVs, the broad hundred rupee notes which aren't found anymore today.

The characters are real, credible and likable despite their flaws. Like most typical families they tear each other apart most of the time, but rally together during moments of stress. And the script is well-etched out especially during the first half. The film moves forward at a brisk pace. 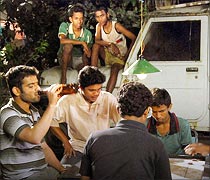 It is in the second half that Manjrekar decides he must give his audience a gut-wrenching experience. Less is more is obviously not an adage Manjrekar subscribes to.

Guns (the old-fashioned revolvers which we don't see on-screen any more) spurting blood, broken noses are thrown at the audience every few minutes. It is reminiscent of the Ram Gopal Varma films of the '90s. Pity because the film would have been equally if not more effective with slightly smaller does of blood and gore.

Not just violence; there is just too much melodrama as well. The sobbing and shrieking could have been curtailed.

There is no attempt at camouflage. Kidneys are sold for paltry sums (the organ donors' act had still not been passed in the '80s.) and cricket betting is a seen as a quick way of making money. Extra-marital affairs happen under the husband's nose, a young girl is only too happy to give up her virginity for a gold chain; the women also do whatever it takes to survive.

One huge flaw in the film is mill-owner Khaitan and his avaricious son-in-law Sameer Dharmadikhari (Mahendra). These two characters are flat, one-dimensional and mouth corny dialogues. At one point, the capitalist Mahendra drops off the paid goon to the assassination site in his own car. Hired killings are never direct transactions, it's a chain of conspiracy which is almost impossible to uncover. It's these incidents which weaken an otherwise tight script.

It is the performances which make this film. Sachin Khedekar, Seema Biswas even the newbies especially Siddharth Jadav have delivered crisp performances. The dialogues are funny, witty and swell-suited to the milieu.

Do watch this film if you enjoy slice-of-life films. Or you would like to know what debris is buried under the huge commercial complexes we find in Dadar-Parel-Lalbaugh area today. But if candy floss cinema is your cup of tea, then it's best you keep away.