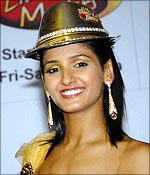 Shakti Mohan, 24, winner of Dance India Dance is celebrating her victory with her fellow contestants outside Mumbai.

She says of her win, "I had never imagined that the audience would give so much support to a girl. I think it's a true achievement for all the girls especially aspiring dancing stars"

She continues, "I entered the competition with a dream like everyone else, and as the show moved on, the fear of elimination also increased."

Shakti gave full credit to her mentor Terrence Lewis for her win. "I will be seeking advice from Terrence sir regarding whatever I do in future. It just feels great -- from being nobody to a somebody"

She now hopes to fly abroad and polish her skills to become a choreographer and boost the popularity of contemporary dance in India.

"Apart from contemporary dance, I also want to learn other forms of dancing such as Kathak and hip-hop," she says.

Terrence has also awarded Shakti with a fine opportunity. "Terrence sir has decided to take me to Paris and train me on an international level. He doesn't compliment anyone so easily, so I will be utilising the opportunity to the fullest.

"I was always a topper in college and was determined to become an IAS officer. But then Dance India Dance came along. And now that I have won it, there's no looking back," she said. 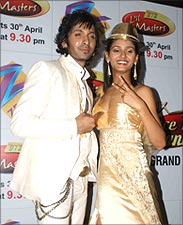 And why would she when she will be getting the opportunity to feature in a promotional music video with Farah Khan's new movie Tees Maar Khan starring Akshay Kumar and Kartina Khan.

"Working with Farah Khan and featuring in the movie Tees Maar Khan is going to be a fabulous experience," she says.

"I don't know what offers I will receive in Bollywood in the years to come. Who knows what I may end up doing, but first and foremost is my love and passion for dance," she adds.

Shakti's two sisters are already in glamour industry. Neeti, a singer, was seen on Music Ka Mahamuqabla while Mukti will soon be seen on Zara Nachke Dikha.

"We are all very excited because we have struggled a lot to prove our talents. And now we are getting so many amazing opportunities, and destiny is taking a positive turn," Shakti concludes.