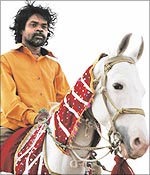 Sukanya Verma: Oh my god, 2010 is turning out to be fabulous at the movies. Ishqiya, Inception, Udaan and now Peepli [Live]?

Sudarshana Dwivedi: I know! It was awaited like any other Aamir Khan movie even though he's only the producer.

SV: I can understand why it would need this intensity of promotion. In the past too, there's been no dearth of relevant films that sank in oblivion or created buzz only in festival circuits. Imagine if Muzzafar Ali's Gaman was made today and promoted under the marketing genius of Aamir, it would definitely be remembered for much more than Seene mein jalan.

SD: I agree. See, promotion does help but what works for Peepli [Live] is that it's a tale told with uncompromising conviction and commitment.

SV: What is it about this film that appealed most to you?

SD: They've portrayed harsh reality of farmer suicide without being melodramatic or condescending. The lot of the Indian farmer has not improved much since the days of Munshi Premchand's Godaan set in pre-Independence India. Actually, Natha (Omkar Das Manipuri) and Budhia (Raghubir Yadav) remind me of Hori Mahato.

SD: The hero of Godaan. In fact, there's a reference to him in the film; remember the malnourished farmer, also called Hori Mahato digging rough patches of earth to survive? Hori's plight hasn't changed even after more than six decades.

SV:  Mm-hmm. As someone who belongs to a relatively contemporary, metropolitan-bred generation, I could relate to the unfortunate divide between the urban mind-set and rural set-up. There is an urgent need to bridge the gap. We cannot be India in halves; one has to have a better understanding of where the other is coming from. Peepli [Live] provides insightful subtext to the same. But there's never any attempt to provide answers.

SD: Answers? The bureaucracy has a Lal Bahadur, a Indra Vikas or a Annapurna. Or the 'Natha card' to deal with such inconvenient questions only, heh.

SV: Gosh, that scene and countless others -- the one about Saif Ali Khan's school crush or journalists scampering to capture footage of Nattha taking nature's call -- had me in splits. At the same time, it's terribly tragic too. For better or worse, satire seems to be the only approach to communicate the existing despair. Is it fair to treat the subject like a comedy?

SD: It is the comic treatment of a cruel situation that has made it so engrossing. The entire rigmarole of breaking news, TRPs, villager bytes and grass-root opportunism is both believable and hilarious. We, as a nation, lack the ability to laugh at ourselves. Peepli [Live] not only does so but does it with a healthy irreverence. Hope it gets appreciated. 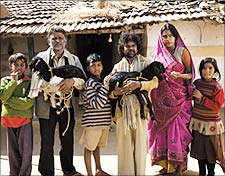 SV: Fingers crossed. Speaking of breaking news, the role of press/electronic media in Peepli, though brings in the maximum laughs, is never really reduced to a contrived caricature. Rather director Anusha Rizvi depicts the all-too familiar rivalry between the vernacular (Nawazuddin Siddiqui) and English press (Malaika Shenoy) with delicious banter. She totally nails it.

SD: Right! There is never a dull moment. It gives the whole effort a healthy freshness. The fish bowl effect that you have while watching a village-based movie is totally absent here as I felt like a participant and not an observer of the unfolding drama. This I feel is Anusha's greatest strength.

SD: That's a good one. It's a compact script which has been executed with equal passion. There are no actors here only characters that all of us have seen or met at some point. I appreciate how Anusha has chosen unfamiliar faces with sound background in theatre.

SV: Seconded. I mean, Farrukh Zaffer as Natha's venom-spewing mom is a firebrand. I'd love to see more of her. Others like Raghuvir Yadav, Malaika, Nawazuddin, Shalini Vatsa, Vishal Sharma and Sitaram Panchal are equally credible. Moreover, isn't Omkar as Natha simply wow? Notice how he doesn't have too many lines? It's either his constantly puzzled gawk or bobbling body language at work. At times, he reminds of a wide-eyed E.T. trying to escape an army of hounding government
agents.

SV: No, seriously. The only discordant note, I thought is the casting of Naseeruddin Shah. He appears too refined, too cocksure and too star-like in a crowd of uncorrupted artistry.

SD: I do not agree that Naseer is a misfit. He brings just the right shade of polished cunning to his Salim Kidwai. In fact, the casting is so perfect that you can see many known faces of politics and media through these unknown faces.

SV: I am with you on that. For all its engaging wit, every scene and close-up is a compelling study or an untold story. Bottom-line: Peepli [Live] is a well-researched, brilliantly-written and effectively documented creation that hasn't negotiated its wry vision for big screen. I'd go to the extent of saying it's the best Hindi film I've seen this year. And I honestly don't think whatever is left of 2010 could offer anything better to contest that.

SD: Touche. That will be four stars and an appeal for tax-free.