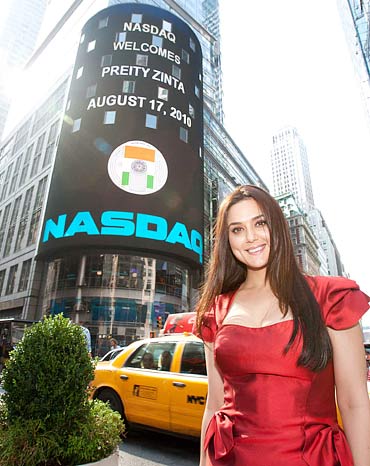 Preity Zinta, who rang the famed Nasdaq bell on Tuesday, now dreams of listing her own company at the world's biggest stock exchange.

The Kal Ho Naa Ho star is only the third Indian actor to ring the bell, with Shah Rukh Khan and Kajol being the first two.

"Am invited 4 d opening bell ceremony at Nasdaq tue morning! Hope i can list 1 of my companies there sumday! Now i'm excited (sic)," tweeted Zinta who is the co-owner of the IPL team Kings XI Punjab.

Wearing a pink anarkali suit designed by Manish Malhotra, she led thousands of cheering fans through Manhattan, as Bollywood hits played in the background.