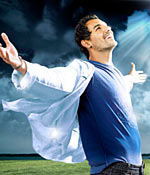 Aseem Chhabra reviews Aashayein. Nagesh Kukunoor's two-year old film Aashayein opens with a fantastic tracking shot -- as the camera smoothly steps inside an old house and from there into a dilapidated, but busy courtyard.

It moves fast as we see many television monitors showing cricket matches and people huddled around the screens. The camera finally rests on one face, just another person in the courtyard who happens to be a compulsive gambler -- Rahul Sharma (played by John Abraham).

There is a lot of promise in that opening scene, but eventually all that showy camerawork is just what it appears to be: Kukunoor saying 'Look what a great tracking this is!'

The camerawork actually has no relation to the rest of film -- sometimes a well-meaning and heart-tugging story about the last few months in the life of man with lung cancer. Aashayein works like many of Kukunoor's successful films -- Hyderabad Blues, Iqbal and Dor -- unique stories that start with good intentions, but eventually the treatments amount to nothing spectacular.

A while ago a friend said the following to me about Dor: "It's a very accessible film for people who want to see art house cinema, but do not know where to start." That sounds a tad bit condescending. Kukunoor's films play an important role -- filling the vast space that exists between the loud Bollywood productions and new remarkable indies by filmmakers like Dibakar Banerjee, Anurag Kashyap, Vikramaditya Motwane and the newest member of the group, Anusha Rizvi.

It is an important space to fill, given that sometimes anything is better that the mindless Bollywood films like Khatta Meetha, Houseful and I Hate Luv Storys. Perhaps that is why some critics respect Kukunoor, a US trained chemical engineer, who is now following his true passion. I just wish his films would be stronger than what they appear to be at the first glance.

Fifteen minutes into Aashayein, Abraham's chain smoking character Rahul is hit with the news that he is suffering from lung cancer. When he mocks his doctor who speaks cautiously, Rahul is told that he has only three months to live. His caring live-in girlfriend Nafisa (Sonal Sehgal) would like to marry him and be there for him until the end. But Rahul -- somewhat understandably -- is lost in sense of self-pity.

After a very Bollywood style emotional running in the rain moment (later Kukunoor makes Rahul mock that moment), Rahul decides to leave his girlfriend, but not before he gifts her a substantial amount of his winnings through his bookie (played by Kukunoor).

Carrying a small baggage of clothes, a ton of money and his Raiders of Lost Ark poster (he dreams of living the life of Indiana Jones), Rahul lands at a hospice for terminally ill. It is an open, brightly lit space, located near a beach (the film was partly shot in Pondicherry) and here our protagonist meets assorted patients: an older man Parthasarthi (Girish Karnad), who has lost his ability to speak; a middle-aged, high class, ex-prostitute, Madhu (Farida Jalal), infected with the HIV virus; a 17-year-old high spirited cancer patient, Padma (Anaitha Nair), who will fall in love with Rahul; and a child, Govinda (Ashwin Chitale, the wide eyed actor from Shwaas), who loves comics, and may have some spiritual powers.

In one of the film's most interesting sequences, with Govinda as the narrator, Rahul begins to imagine that he is Indiana Jones living through his own adventure. The adventure does not measure up to its initial promise, and it seems as if Kukunoor is telling us 'Look how clever I am to reference Steven Spielberg's Indiana Jones in my film." I have to admit though (and this may sound sacrilegious to some), but Abraham does look rather neat as Indiana Jones!

Each of these characters, as well as the rest of hospice staff, build strong ties with Rahul, a good looking, vibrant newcomer who also has an aura of mystery to him. There are some touching and warm moments in Aashayein -- Rahul watching Anand with Padma; smoking with Parthasarthi; getting close to Madhu, while the rest of the patients seem to think that they will get infected with HIV just by sitting close to her. 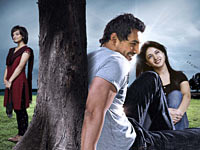 In due course, Rahul learns the lesson to live life to the fullest, without feeling sorry for himself. Unfortunately, none of this adds up to great, compelling cinema.

Aashayein is beautifully shot by Sudeep Chatterjee. The day scenes at the hospice, as well as the beach sequences, are lovely to look at. But the background score by Salim-Suleiman is manipulative and a tad bit overcooked. The songs may work by themselves, but in the film they seem to overemphasise and underline the emotional content of the story.

Kukunoor works well with most of his supporting cast. Karnad and Nair play very convincing cancer patients. But Jalal -- one of my favourite character actors from the 1970s, hams her way, as if she has just walked out of the set of Karan Johar's Kuch Kuch Hota Hai. There is no AIDS suffering in her character and performance.

Aashayein's release was delayed due to business issues between the film's producer Percept Picture and distributor Reliance BIG Pictures. Otherwise the film would have opened a little after Abraham's experimental work No Smoking, around the time when the star was trying to redefine his career and his place in the industry.

In the first half of Aashayein, Abraham is mostly the Bollywood star with his gelled hair, his smile, dimples and a cool unshaven look. Somewhere in the second half, Abraham's character -- now closer to death -- suddenly drops weight, as if it randomly occurred to him that he is a dying cancer patient in the film.

And just as then his performance becomes somewhat nuanced and engaging. It is a rare occurrence in a Hindi language film, but for that brief, less than an hour time period, we are able to forget that we are watching John Abraham, the Bollywood star.

'People will compare Aashayein to Anand'

Chak De girl and her Aashayein!