Asal is for Ajith fans 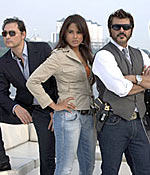 He crashes into cars, blows up water-tanks, shoots villains and bashes them all up with his sledge-hammer of a fist.

With a tagline, "The Power of Silence" and a droid-like demeanor to boot, this Tamil movie is all about one terminator aka human being with a heart of gold -- Ajith Kumar.

Aside from being Ajith's 49th film, Aasal has several unique facets to its credit. Firstly, Ajith has given up his title of the "Ultimate Star". Another interesting fact is that the actor has been credited with the screenplay (along with with Saran and Yugi Sethu) and direction.

Picturised largely in France and other exotic locales, Prashant D'Misale's camera zips across the landscape in a breath-taking fashion. You can actually feel your ears turning pink with the cold captured through Prabhakar's sleek art-work. Anthony's editing is smooth while composer Bharadwaj has gone to town with Vairamuthu's lyrics.

Story-wise, however, the Billa hangover continues. It's as though every succeeding director tries to arrange his cast, crew (and lastly) the script to suit the specifications of the blockbuster. And this one's no different.

The beginning, however, is very promising. We've got Jeevanandham (Ajith, in all white apparel) heading the Eurasian Trading Company based in France. He supplies arms to the government but is against anything illegal. He's got three sons -- Shiva (Ajith, again), Sam (Sampath) and Vicky (Rajeev Krishna, back after a long time). The brothers, however, don't get along very well.

Sam and Vicky are furious that their father favours Shiva, born to another woman. They've been pretty much at each other's throats ever since. Unfortunately, their jealousy is roused further by Kalivardhan (Pradeep Rawat), their maternal uncle who has sworn to destroy Shiva. Jeevanandham's death, however, changes things. Together, they plan to oust the favourite son out of the picture by arranging an illegal weapons deal with Brijesh Shetty (Kelly Dorji), in Mumbai. In cahoots with them is Daniel Dharmaraj (Suresh), a French cop.

In the meantime, Shiva has his own band of supporters. They are Mirasi (Prabhu in a blink-and-you-miss role, obviously another Billa hangover), Sara (seductive Sameera Reddy), a cultural attache at the Indian Embassy in Paris, and Sulabha (Bhavana) who always predicts her life based on her father's book. The icing on the cake, though, is Don Samsa (Yugi Sethu) a pseudo-gangster with dreams of making it big, but who somehow always end up becoming the fall guy  providing plenty of laughs for the audience.

Naturally, all these characters revolve around one man -- Shiva. Vicky and Sam plot endlessly, the villains screech, scream, rave and rant, while Shiva -- after a promising start in the first half hour where it looks like he actually has emotions -- reverts to his killing routine. Of course, there are one or two minor plot twists but then when you've got a one-man army on the rampage, you tend to lose sight of things.

Buildings collapse, iron bars splinter, bullets ricochet and a bearded Shiva blows a cigar with incredible panache. He appears slightly less hirsute during the song sequences and even dances a bit. But he looks like he has taken the "Silent" tag very seriously. Barely a muscle twitches in his face at any point. It's intriguing, stylish and suave for the first hour, after which it gets repetitive. The incessant smoking adds no points either.

Sampath looks sleeker with every movie, but unfortunately hiccups either with tears or anger. Rajeev shines at exactly one place -- before his confrontation with Ajith while Pradeep Rawat, Prabhu and Kelli Dorji have been totally wasted.

A few things alleviate your boredom in this tale. They are Yugi Sethu's comic capers as the dim-witted don who wises up after the jokes on him; sizzling Sameera who simply oozes sex appeal even if she's wearing sweat-pants; and cute Bhavana, an apt foil for her. The conversations the two have -- when they realize that they're both pining for the same man -- sparkle with wit. And those are probably the only areas where you still get a glimpse the same Saran who gave us Kadhal Mannan and Amarkkalam.

With a cast such as this, perfect settings and a reasonably complicated set-up, one would expect fireworks. What we do get instead are intriguing situations that you hope are going to explode on-screen but turn into damp squibs.

Saran pandered to Ajith's image and the results are obvious. The songs hinder the screenplay and the situations are brainless with guns, fist and fury. There's even a fight sequence where Ajith simply breaks down steel doors with his bare hands. Numerous "thala" dialogues pepper the proceedings.

To conlcude, die-hard Ajith fans will have plenty of reasons to rejoice. For the others, leave your brains at home.

A first, Indian gods on US postages