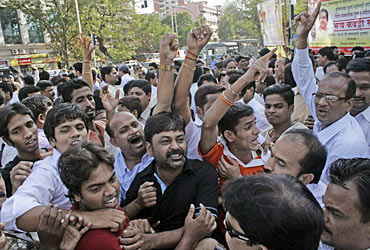 Sending a stern message to troublemakers protesting against the release of My Name is Khan, Mumbai police on Friday said it would apply provisions of a law against them which stipulates that those inflicting damage will have to compensate the victims.

"In case of any damage caused by protestors, we will ensure that the victim gets the compensation. Section 51 and others of the Bombay Police Act, which will pave way for the victims to seek compensation, will be applied against the agitators," Joint Police Commissioner (Law and Order) Himanshu Roy told PTI.

"Our utmost priority is to ensure everything goes fine and apply stern sections of the IPC, the Bombay Police Act and others against the troublemakers," he said.

Against the backdrop of the decision by multiplex chains owners in Mumbai to have a limited release of Shah Rukh Khan-starrer MNIK post-noon on Friday, no untoward incident was reported, Roy claimed.

Meanwhile, police have arrested 665 more Shiv Sainiks on Friday morning as a preventive measure, taking the total number of the outfit's workers put behind the bars to 2,665 since Tuesday.

Fourteen Shiv Sainiks including a corporator were Friday arrested from outside cinemas screening My Name is Khan after the activists indulged in stone pelting.

"We have arrested Shiv Sainiks who tried to disrupt the screening of the movie at the Fun Republic by resorting to violence," Deputy Police Commissioner, K Prasanna told PTI.

A group of Sena activists including corporator Rajul Patel gathered outside the theatre in Andheri protesting against the release of the movie following which police swiftly acted and took some of them into custody, police said.

As some of the protestors started pelting stones, police resorted to lathicharge to bring the situation under control, police added.

Meanwhile, Maharashtra Home Minister R R Patil who saw My Name Is Khan at a multiplex in Mumbai on Friday, said that the government will ensure security to all cinemagoers, even as many theatres in Mumbai shied away from exhibiting the movie fearing threats by Shiv Sena.

Minister of State for Home Ramesh Bagwe, who accompanied Patil for the screening, said the film has been released in 13 cinema halls.

'People should boycott My Name is Khan'

"To mark protest against SRK for his advocating cause of Pakistan the movie should be boycotted by the every true Indian," Togadia told reporters in Jalandar.

Togaria said that SRK earned the fame and money in India but supports Pakistan and to teach him a lesson not only his latest movie but other upcoming movies should also be boycotted. Asked his comments on the Shiv Sena's protest against non-marathis, Togria termed it as "political hype of Shiv Sena" and said VHP never supported Shiv Sena on the issue.

"Not only north Indians specially Bihari in Mumbai, but every Indian has a right to earn money for the survival in any part of the country even any Indian can stay anywhere in the country," he said.