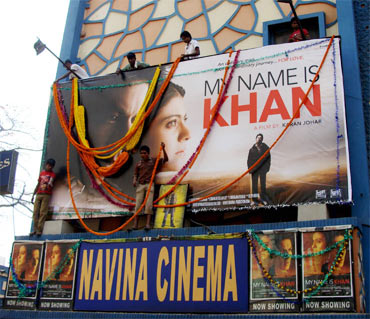 Gujarat multiplexes have started screening My Name is Khan after cancelling the first shows due to protests from Vishwa Hindu Parishad and Bajrang Dal activists, members of the Multiplex Owners Association (MOA) said today.

"Screening of MNIK has begun in most of the multiplexes in the city," Owner of Wide Angle Multiplex, and member of MOA Manubhai Patel told PTI. "Though there were protests against the film in the morning, the screenings began with the second show after the first shows were cancelled," he said.

Bookings opened at City Pulse, City Gold, Fun Cinemas and BIG Cinemas in the city. In Vadodara and Surat, MNIK was screened amidst tight security arrangements. None of the shows were cancelled and no incident of violence was reported. In Surat, major multiplexes like Rajhans, Valentine and Rupam theatres screened MNIK as per the schedule.

Many VHP and Bajrang Dal activists protesting against the screening of MNIK have been detained at various places, police said. Some VHP members tried to disrupt the film's screening at Fun Republic cinema, but were stopped by the police and detained. In Rajkot, VHP members staged protest against Khan and the film forcing the multiplex owners to cancel the first show.

On Friday, VHP activists had torn down the posters of MNIK and caused ruckus in a bid to halt the release of the film in Ahmedabad and Jamnagar in Gujarat.

Meanwhile, some multiplex owners in Mumbai have decided to screen the film, post noon. However, several single screens have decided against the release till the issue is resolved between the Sena and the actor.

Over 1,800 Sena activists, including functionaries, have been arrested in the last three days to thwart protests by the Sena, which is demanding an apology from Shah Rukh for his remarks favouring Pakistani players in the Indian Premier League 3.

MNIK got a smooth release in Delhi, amid beefed-up security.

Isolated cases of protest against the film's screening were, however, reported last night when five persons claimed to be Shiv Sainiks tore posters of the film and damaged window panes of Satyam cinema hall in west Delhi. They have been detained by the police.

"Policemen are deployed near the theatres in adequate numbers to avoid any violence. We are keeping close watch," a senior police official said.

The film, which is banking on the chemistry of Shah Rukh and Kajol, recieved a good response in Delhi theatres. "Morning shows have 85 percent occupancy but the post noon shows are all sold out. Our theatres are booked till Sunday," Jayendra Banerjee, Vice President Satyam Cineplexes told PTI.

"Some 75 screens in Delhi are screening the movie. The film has also benefited from the Shivratri holiday today. On an average, multiplexes are running 11 to 12 shows a day," a distributor said.

Meanwhile, a sell-out crowd greeted MNIK in West Bengal, which released in 131 cinema halls across the state without any trouble.

Police sources said that there was no untoward incident in any cinema hall or multiplex when the film released.

"The only crowd we can see is that of cine-goers. There has been no protest of any sort," an officer of Kolkata Police said. "Security arrangements have, however, been beefed up at the halls and multiplexes in view of the controversy."

A multiplex in Nagpur screened the morning show of MNIK amid tight security arrangements. However, uncertainty prevailed over the film's screening in most single screen theatres, as they refunded the tickets of the noon show.

Cine exhibitors and distributors met up this morning to discuss the situation. Heavy police was deployed in all the theatres where the film was slated to be screened.

In the picture: An MNIK poster on a Kolkata theatre gets garlanded. Photograph: Indian Blooms News Service.