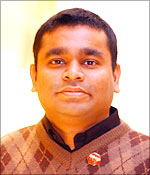 Oscar and Grammy award winning musician A R Rahman will perform live in his "Jai Ho World Tour" concerts during coming summer, according to reports.

Besides Rahman, these concerts will reportedly include few dozen artists/dancers also. These shows are claimed to be audiovisual spectacle involving pyrotechnics and lighting.