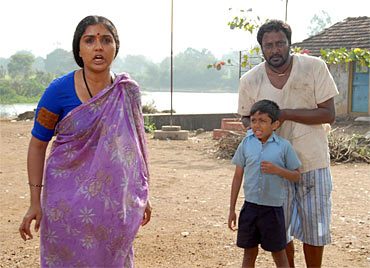 Debutant director A R Ravindra's Pareekshe is not about gangsters, lovers or police as is seen in Kannada industry these days.

Through this movie, the 29-year-old director wishes to talk about the atrocities against lower caste people in North Karnataka.

Pareekshe traces the life of Bangari, a Dalit woman, who is subjected to discrimination and false accusations due to her caste.

Bangari faces the wrath of her family and villagers after the village doctor, whose advances she resists, spreads a rumour that she is affected by AIDS.

"Bangari is a very beautiful woman and most upper caste men in the village are after her. But when repels their advances all hell breaks loose," says Ravindra.

"Such incidents take place regularly in North Karnataka. Both the producer, Sanjay B Patil and I are from this region and thus wanted to create awareness regarding the plight of the lower caste people through this film. We are saying that no one should be judged based on one's socio-economic status", says the director.

The stigma attached to AIDS and gender inequality are the other issues that the film looks into.

The entire movie has been shot in and around Belgaum. Most of the actors are from North Karnataka. Anu Prabhakar is the main protagonist while Vinaya Prasad, Shantamma and television actor Muni play significant roles. The team has also managed to rope in theatre doyen Yenagi Balapa for a role. He plays a helpless village elder in the film.

According to the director, "The actors have done a fabulous job. Anu and Muni play husband and wife. Anu is from North Karnataka and this came as an added advantage as she spoke Kannada in that style effortlessly."

There is only one song in the film written by Geetha priya of Hombisilu and Mannina Maga fame. The song talks of caste divides. Music is by Hemanth Kumar.

Pareeskshe will release in March.