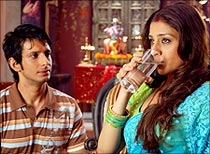 I had once declared great faith in Tabu's ability to be as much of a man as our heroes. But her latest film proves that while she might be a fantastic actress, she really isn't an Akshay Kumar.

Toh Baat Pakki works like a Priyadarshan drama devoid of the outrageous plot and the utterly watchable hero, and we're served up a bland, preposterously dated 'comedy' with lame jokes and little to laugh at.

Director Kedar Shinde tries hard to channel the wholesome humour of comedies like those of Basu Chatterjee and Hrishikesh Mukherjee, elaboratey stagey pieces of extremely family-friendly fare. But what he doesn't realise is that those films were masterpieces of plot and dialogue, and that just having people smile a lot doesn't make up for the complete lack of a script.

Sharman Joshi -- described in the film as 'tall, fair, and muscular,' prompting the question of whether he himself had a part to play in the dialogue writing -- is a fine actor but is here given a conventional hero role so basic it feels like a caricature. He wears tight t-shirts and looks soulfully into the distance, and one can't help but wait for some sort of punchline. Like in most of the film, none arrives to save the day. 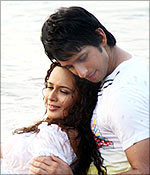 The boys -- Joshi and a clueless Vatsal Seth -- are clearly in the film only to play off Tabu, who plays elder sister to the bovine and apparently eligible Uvika Choudhary in a town where every boy shares the Saxena surname, just like Tabu and her husband, a likeable but equally daft Ayub Khan.

Tabu herself can't help being a good actress. But she clearly doesn't have the wherewithal to rescue a script this weak, loaded down with bad lines and a very weakly written character. She manages to amuse for maybe a minute or two in a film that seems far longer than its two hour running time. To be fair to the stunning lady, though -- even Akshay'd have trouble with a turkey like this.