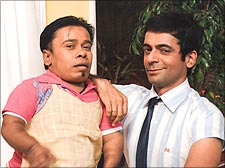 Indian television will have its first silent comedy show next month. Titled Gutur Gu, it promises to be novel and interesting.

The show's protagonist Sunil Grover shares quite a few similarities to the hilarious Mr Bean. "The genre is similar but it's a coincidence that my character looks like him," says Grover, a stand-up comedian. "But every spoken movie is not Titanic and every silent film is not Pushpak. I didn't look for inspiration in silent comedies like Charlie Chaplin, Pushpak Vimana and Mr Bean."

Grover will play Balu Kumar, a simple and super-enthusiastic character, who invariably manages to land in misadventures.

The actor says he had a tough time keeping his mouth shut while shooting for the show. "It was something I took time getting used to," he says. "We have a tendency to move our lips but I managed it." 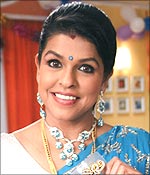 "The moment I heard the concept, I agreed to do the show," Bhavna says. "This show is innovative for a change. I love challenges. It's difficult to make the viewers laugh while keeping your lips sealed."

Daya Shetty's character is fascinated by motor bikes on the show, and leaves no opportunity to harass his neighbour Balu Kumar.

"The biggest challenge is to give good (facial) expressions to situations without delivering dialogues," he says. "This is a learning process for me."

Rajul Hegde in Mumbai
SHARE THIS STORYCOMMENT
Print this article