News
Business
Movies
Sports
Cricket
Get Ahead
Money Tips
Shopping
Sign in  |  Create a Rediffmail account
Rediff.com  » Movies » Thank you for making life seem funnier than it is

Thank you for making life seem funnier than it is 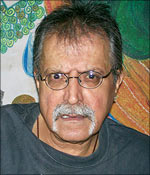 Kundan Shah's seminal comedy Jaane Bhi Do Yaaron has a beat -- a dark, chilling beat -- when Ravi Baswani's protagonist Sudhir Mishra, the younger of the two bumbling, idealistic photographers, decides he has had enough damned persecution.

The two heroes have just managed to misplace a corpse, and a local Bombay copper is shoving them around, harassing them just because he can. Something visibly snaps inside Sudhir, his usually twinkling eyes awake with a manic gleam as he raises his heavy all-purpose bag and plods determinedly over to strike the policeman.

The background score gets uncharacteristically intense, and we have a few seconds of potentially genre-switching seriousness before the cop turns around and Baswani, bag held over his head, helplessly and hilariously tries to warble his way out of the moment, breaking into a random, pointedly innocuous and incredibly silly la-la-la.

Yet that brief moment is enough, a loaded statement of common-man angst, the sudden ferocity of which only works because it comes from a truly gifted comic actor. And nobody knows persecution like the greatest clowns.

Ravi Baswani is no more. He was just 64, unmarried, and on his way to directing his first film when halted by a fatal, tragic heart attack. Considering the man is doubtless a cinematic icon, it is surprising how few of his films we remember now, outside of JBDY, Pankuj Parashar's acid-trip Peechha Karo and the actor's staggeringly brilliant debut feature, Sai Paranjpye's Chashm-e-Buddoor.

In that debut, he plays cigarette-filching student Jai Lakhanpal, nicknamed Jomo. Given to flamboyant clothing and desperate attempts at hitting on girls with routines taken from Amitabh Bachchan movies, Jomo might be a loser but Elvis forbid he act like one. The airs just as much in place as the shiny shoes, even when he gets beaten up, pretending to be a Bollywood director.

There's something to be said for keeping up appearances, and Jomo's a fantastically flashy fool who deserves applause.

And yet, even with this farcical character, he makes us care. There is a moment when he, riding with studied studliness down the streets of Delhi, spots a girl -- Paranjpye's daughter Winnie Joglekar -- who needs a ride. He pompously steps up and is charm personified as he finally manages to pick up a girl, albeit literally.

His grin betrays disbelief and sheer joy, turning ashen when the girl hops off the bike to run off to meet her waiting lover.

There is hilarity in both action and reaction, but Baswani sells you the moment with a morsel of heartbreak.

But why only look outside the laughs when they've been this magical? Jaane Bhi Do Yaaron shows us a whole group of actors at the very top of their game -- the holy troika of Naseeruddin Shah, Om Puri and Pankaj Kapur giving us a veritable masterclass. But it is Baswani's cowardly-courageous Mishra that endows the film, one of the most important Hindi features of all time, with its warmth.

For it is critical to realise that he is the one character -- the one clumsy, ineffective, overambitious dupe -- who remains consistently likeable right through the very end, the one whose morality doesn't shift and the one, therefore, most real. 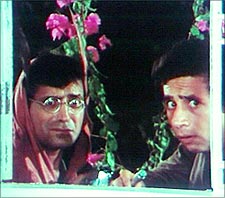 Every scene of that film seems made for quoting, but singling out one -- where both photographers use the same, wonderfully elaborate 'you dream of becoming a model, don't you?' photo-studio routine verbatim on the same woman -- shows that while Shah and Baswani were both phenomenal and played off each other superbly, there was only one of the two nuts you actually rooted for.

I last remember watching the actor as old, grizzled Papaji in Naseer's directorial debut, Yun Hota Toh Kya Hota. It was good of Naseer to bring out his old acting comrade, who in turn performed well enough.

Ravi Baswani will be missed. And there might not be many movies or characters for us to remember him by, but the ones he created are true-blue hall of famers, ones for the ages.

Generations of naturalistic comics after him owe a lot to Baswani's genius -- his excitable, harebrained, high-pitched, hyperactive, klutzy, Duryodhan-supporting doggone genius -- as do we, the gratefully paying public.

Rest In Peace, sir. Thank you for making life seem funnier than it is.