Watch out for Ash, Freida Pinto in Venice 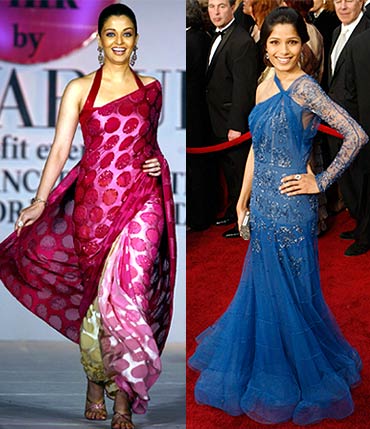 Mani Ratnam's Raavan in Hindi and Anurag Kashyap's The Girl in Yellow Boots will play in out-of-competition slot at the 67th Venice Film Festival, opening on September 1.

Ratnam, who will be honoured by the Festival with the Jaeger-LeCoultre Glory to the Filmmaker Award, has already released his movie in India, though to poor box office returns and unflattering reviews.

Kashyap will be at Venice for the second consecutive year: last year, he had Dev D and Gulaal in the festival. Rakeysh Omprakash Mehra's Delhi 6 was the third Indian entry last time, and all three films played outside the main Competition.

The plot centres on Ruth (Koechlin), searching for a father she has hardly seen, but cannot forget. Driven to desperation, she begins working without a legal permit in a Mumbai massage parlour, and Kashyap uses the city with its dark and forbidding underbelly to show how Ruth gets sucked into it.

With an austerity drive in place on the Lido and no grand opening night party, the inaugural evening will unspool two more films: Robert Rodriguez's action picture Machete, and Andrew Lau's martial-arts story Legend of the Fist: The Return of Chen Zen, Ben Affleck's The Town, in which the actor essays a bank robber, Martin Scorsese and Kent Jones' Elia Kazan tribute documentary A Letter to Elia, Casey Affleck's directorial debut, I'm Still Here: the Lost Year of Joaquin Phoenix, John Turturro's love letter to Neapolitan music, Passione and Julie Taymor's gender-bending The Tempest, with Helen Mirren that will close the festival on September 11 are some of the other gems.